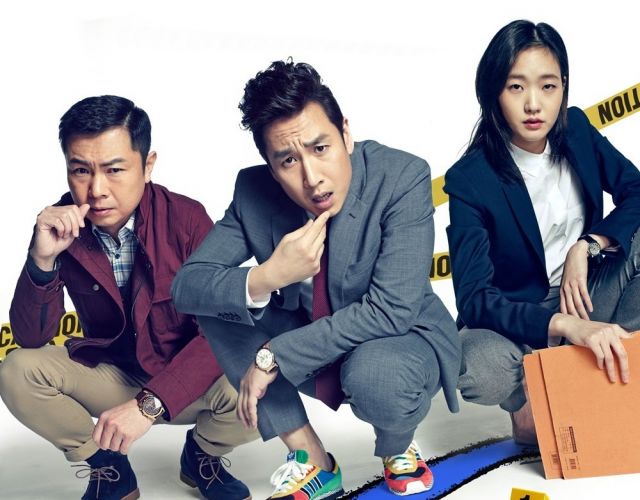 Ho-seong (played by Lee Sun-kyun) is a somewhat eccentric lawyer. He uses his weirdly modulated tone of voice and tortured logical explanations to confuse juries into returning not-guilty verdicts. Ho-seong is kind of a jerk, and his semi-comedic powers of lawyering can only ever really be used to subvert justice for the sake of a paycheck. So matters take a turn for the strange when Ho-seong is forced to do battle against an elaborate corporate conspiracy more because he hates losing than because he actually cares about justice.

I tend to complain a lot about movies that use improbably conspiratorial corporate bogeymen as villains. And strictly speaking, "The Advocate : A missing body" is just as implausible as, say "Veteran" from earlier this year. Funnily enough I didn't mind this so much. Part of this is just due to the strength of Lee Sun-kyun's performance. He really sells Ho-seong's very specific mannerisms, to the point that Ho-seong feels more like a character from a TV show than he does the protagonist in a feature-length legal thriller.

Actually, the whole cast really does a great job bringing the case to life. Seon-min (played by Kim Go-eun) is a prosecutor who already knows Ho-seong, and her main impression of the man is that he is just so unbelievably annoying. And he is. What really sells the point, though, is that Ho-seong himself knows that he's really annoying, and every moment of minor victory is filled with very self-satisfied gloating on Ho-seong's part.

The writing as a whole is excellent, actually. Choi Kwan-yeong and Lee Gong-joo have constructed a very tight screenplay where every single scene, yes, that's right, every single one, contains a very important clue that ties everything together when the dopey Ho-seong pulls victory apparently out of thin air. It helps, by the way, that only the early portions of "The Advocate : A missing body" have much of a legal courtroom presence. Once the first leg of the mystery is solved, the narrative construction of "The Advocate : A missing body" is much more akin to a heist movie- where what's being heisted is evidence.

The sense of pacing and logic is excellent. Take the initial crime scene. I noticed all sorts of suspicious inconsistencies and so did Ho-seong. The fact that Ho-seong does not initially care whether or not his client is innocent also adds some great flavor. Particularly because later on, when Ho-seong does care about the innocence of his client, it's mostly because this has become the best way for him to come out of "The Advocate : A missing body" a winner.

"The Advocate : A missing body" is a solid, entertaining, smart, and all-around just plain fun legal thriller that plays well to its strengths. There's no pretentious hand-wringing over justice and legality here. The main joy here is watching Ho-seong use his smarts to show those corporate types that real brains comes from a well-educated mind, not the ability to manage an army of dopey goons. The film is a great example of how it's easy to forgive a script for making the bad guy overpowered when the main effect of this is to make it that much more satisfying when the hero's awesome plan obliterates everything.

"The Advocate : A missing body" is directed by Heo Jong-ho and features Lee Sun-kyun, Kim Go-eun and Im Won-hee.

"[HanCinema's Film Review] "The Advocate : A missing body""
by HanCinema is licensed under a Creative Commons Attribution-Share Alike 3.0 Unported License.