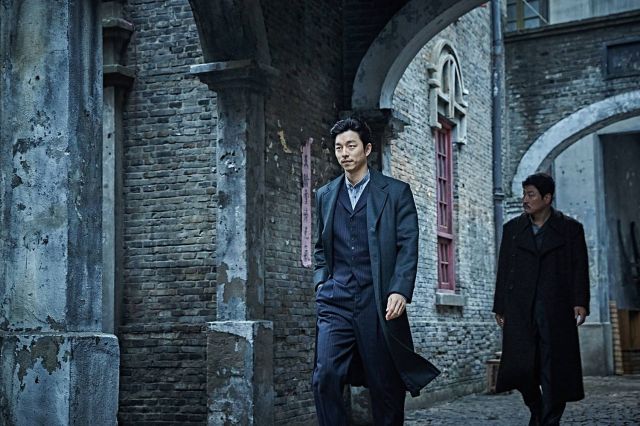 The time is 1923. Jeong-chool (played by Song Kang-ho) is a Korean man turned Japanese crimefighter. Unlucky for him, the main criminals the Japanese are chasing happen to be nationalist Korean terrorists, led by Woo-jin (played by Gong Yoo). Oddly enough Gye-soon (played by Han Ji-min) is the more identifiable leader, less because she's important and more because as the token woman Gye-soon stands out more obviously. Ditto the foreign guy, who has few lines and even less apparent motivation but who's noticeable because everyone has to talk to him in English.

...Where was I? Ah yes, anyway, Jeong-chool wants to make good with his Japanese masters yet is torn emotionally by how his Japanese friends are all jerks, and in some cases Jeong-chool is literally hunting down his old schoolyard chums. Alas, Song Kang-ho never gets much of a chance to use his powers of acting to explore the murky ethics of the situation. There's just too much stuff going on, which is sort of the point isn't it? Only in true chaos can a person find themselves.

Take the big opening setpiece- the culmination of a raid that quickly manages to go very bad very quickly what with all the background noise. Complicated spy plotlines, Japanese soldiers leaping around like cats above Korean rooftops, tricky camerawork designed to make it hard to figure out who got the jump on whose ambush, constant gunfights, blood spilling around all over the air, and the shadows, egad, the shadows spilling out everywhere. Which is just as well. Any time a character is stupid enough to stand out in a brightly lit area for an extended period of time they become the victim of some fairly elaborate violence, if not something worse.

Hopefully I have impressed on you that "The Age of Shadows" is loaded with action, action, action. Even brief scenes of actual detective work are kept moving along by the tacit understanding that since everyone is talking about explosives, logically, that must mean there are explosions just around the corner. Compared to that, Jeong-chool's double consciousness is...hard to keep track of.

Yes, for all the technical achievements underlining "The Age of Shadows", I can safely file the actual plot of this movie under the heading of "so complicated that after a certain point I just stopped trying", because that's the choice "The Age of Shadows" gave me. Either I could scribble notes keeping track of which character was doing what and why, or I could wait until the next gunfight and think to myself "wow, that sure is a cool gunfight" in a satisfied manner.

To be perfectly clear, "The Age of Shadows" is a fun, enjoyable, well-made movie. It's just that behind the deep superficiality of the rollicking action scenes there's relatively little interesting subtext worth discussing. True, "The Age of Shadows" does continue the somewhat ominous trend in South Korean film of late of shoving our faces in the fact that Koreans cooperated with the Japanese Occupation. But as subtext goes, eh, it's been done better in other places.

"The Age of Shadows" is directed by Kim Jee-woon and features Song Kang-ho, Gong Yoo, Han Ji-min and Um Tae-goo.

"[HanCinema's Film Review] "The Age of Shadows""
by HanCinema is licensed under a Creative Commons Attribution-Share Alike 3.0 Unported License.