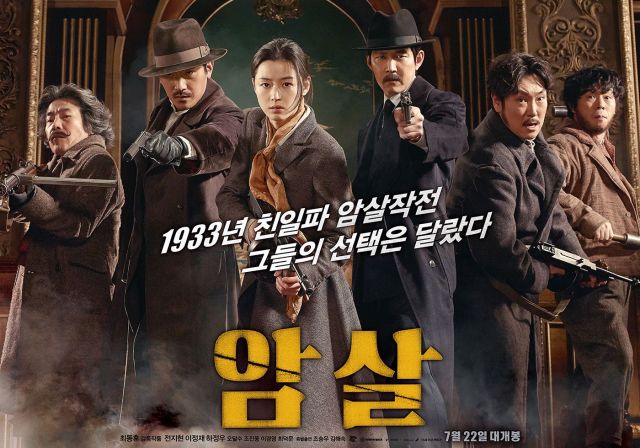 South Korean media doesn't deal much with the Japanese Occupation. The main reason for this is historical awkwardness. The resistance wasn't all that effective. And after the war most major figures involved in it either joined North Korea, or they ended up in a losing political battle with the US-backed South Korean dictatorship, which was managed almost entirely by Koreans who had collaborated with the Japanese. "The Assassination", amazingly enough, actually addresses this directly. The framing device is in 1949 and the main villain in 1933 isn't a hardened Japanese soldier, but a Korean collaborator.

And that's not the only part where this gets messy. Collaboration with the Japanese is an explicit, constant plot point in "The Assassination". Most characters, at one point or another, have to deliberately fudge with loyalties or misrepresent their identities in order to pull through on any kind of objective. The main characters may look all friendly in the press materials, but for most of "The Assassination" they don't actually know for sure who's working for who. Or even what each others' names are.

As a period piece "The Assassination" excels. This isn't a modern action thriller dressed up in olde tyme clothing. No modern technology means that it is extremely difficult for characters to keep track of each other, and misinformation is paramount. Entire rooms of people, oftentimes including (relatively) innocent bystanders end up getting killed. In the heat of the moment this does a lot for tension- our main characters are now able to deceive each other and everyone else for another hour or two.

The moral justification for all this? Because the Japanese Empire is bad. Obviously we all know this, but it's rather telling how director Choi Dong-hoon doesn't give us very many moments of the Japanese Empire actually being all that directly evil. Sure they kill people...for the greater good. The argument isn't a terribly convincing one but even so, I had difficulty ignoring the fact that for all practical intents and purposes the lead characters are terrorists who also use the exact same justification.

There's a lot to chew on here politically- although admittedly that's probably tangential to "The Assassination"'s status as an action film. But on that level too "The Assassination" is pretty on the nose. The explosions are meant to distract us from the fact that a flowchart is necessary to keep track of what's going on in the actual story. They are very well-done explosions- more than enough to satisfy whatever your minimum adrenaline content, with proper style to boot.

The main weakness in "The Assassination" is that it might take you awhile to get all of the characters straight. But for me, when that moment finally clicked and I could see just what a beautiful mess this movie looked like in full focus...well, that much was quite a treat. On nearly every level there's a lot to appreciate in "The Assassination". This is a professional production done with real skill and craftsmanship. I'm not sure whether director Choi Dong-hoon actually intended for there to be historical political commentary, but who cares? See what you want to see- there's plenty of it here.