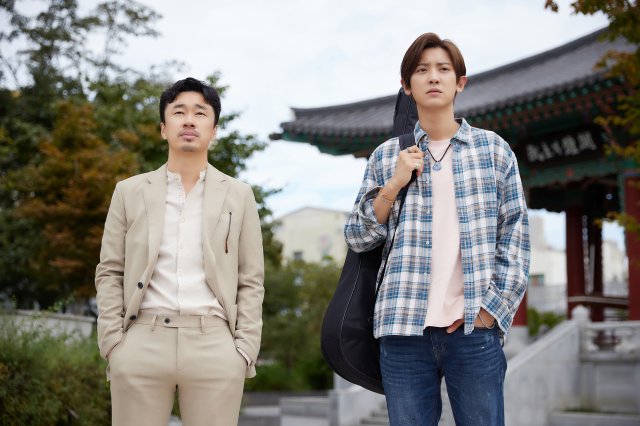 Via opening montage we see the once lauded music manager Min-soo (played by Jo Dal-hwan) devolve into largely forgotten has-been. He enjoys an apparent reversal in fortunes upon meeting Ji-hoon (played by Chanyeol) who has an amazing singing voice. There's just one problem. Ji-hoon is terrified of public performances. So in an effort to help Ji-hoon overcome his fears, and also help Min-soo himself escape his past decisions, Min-soo concocts an elaborate busking scheme wherein Ji-hoon performs from "The Box" to overcome his stage fright.

Strange though this may sound, "The Box" is actually even less complicated than that synopsis makes it appear For one thing, despite the movie initially taking place from Min-soo's perspective, his own problems slowly disappear over the runtime, to the point he doesn't even seem to have a self-interested reason to help Ji-hoon. The movie very abruptly ended almost immediately upon Ji-hoon finally conquering his fears, despite it not being terribly clear what either lead character will do next with their lives.

As a road trip movie "The Box" is more concerned with scenery rather than setting, hitting various landmarks to the south and the southeastern part of South Korea. Despite the scale of the cute little map that depicts their travels, not every major location is visited, and some are seen so briefly they don't even get a song. Incidentally, the music is done almost entirely done via busking outdoors. The main exception is the trip to the Yeosu Expo, with even that musical number feeling less like a proper job and more like Min-soo calling in a favor.

Most of the music is too brief to be especially memorable, which is a shame since Chanyeol covers a wide variety of genuinely interesting songs. In one case he even puts a fairly convincing twist on a silly advertising jingle for fried chicken. The trouble is, nearly all of his songs on-screen feel like that, just clips from longer songs. The inherent silliness of the gimmick of Chanyeol playing his music in a box likewise doesn't lend itself to good staging.

And rather unavoidably, we get to the problem of Chanyeol himself. Though a talented singer, he simply isn't a very good actor, and the rote script doesn't do him any favors. The sad childhood flashbacks in particular don't really do much to explain why he has stage fright. Although really, nobody needs a reason to have stage fright. It's a very common fear. You can take classes to get over it and everything.

But even under the most charitable possible interpretation, "The Box" is expecting us to root for Ji-hoon mainly because he tries so hard, and also looks very cute while he's trying so hard. In terms of the target audience for this movie, Chanyeol fans, "The Box" probably gets the job done in terms of showing a more humble side to the musical star, with several pretty pictures of the South Korean countryside to boot. There's not much to recommend this movie to anyone else though.