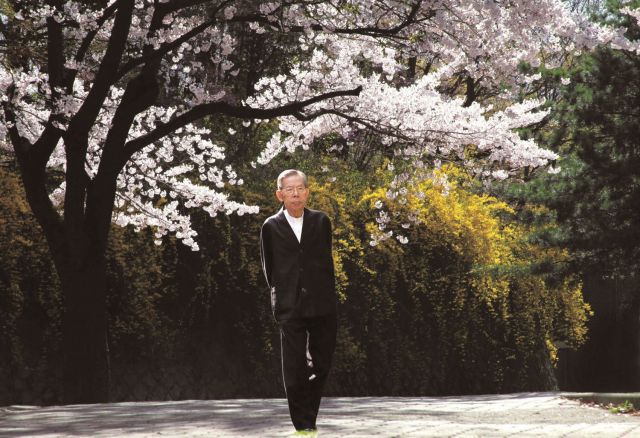 I don't know very much about the historical importance of Cardinal Kim Soo Hwan, and this documentary doesn't go over his accomplishments in very great detail. It is assumed, to some extent, that the viewer at least knows who this man is. This might sound a bit disorienting, but in the context of the film the reason for this detached storytelling is established right from the beginning. The very first we see of the man, Cardinal Kim Soo Hwan is acting jovially confused about which camera he's supposed to look at.

Cardinal Kim Soo Hwan was not a man who cared very much about media presence or the popularization of his identity. This certainly takes on ironic overtones given his role in the Democratization Movement, but it's very clear that Cardinal Kim Soo Hwan never really thought of himself as being an important entity in the historical process. For him it was just, what can I do to help people? I'll do that. That sounds like a good idea.

Given that Cardinal Kim Soo Hwan died five years ago and there is quite a bit of footage here that was deliberately filmed with the intent of creating this documentary, it's hard not to ignore the general context where the film is being released today. In many ways Cardinal Kim Soo Hwan represent a brand of personal, emotionally focused Catholicism. Basically what we've been seeing since Pope Francis attained the Church's highest position.

As a result, rather than bray about the extent and wonder of Cardinal Kim Soo Hwan's accomplishments, "The Cardinal" instead tells a much more personal story about the kind of man he is on a personal level, and emphasizes that rather than any kind of more historically epic tale of him being larger than life. It's inescapable just how good Cardinal Kim Soo Hwan is with people. Oblivious and uncaring of the camera, we constantly sees him mete out small joys and annoyances to the people he meets, and they always come out the better for the experience.

Interviews with other people, too, are less about Cardinal Kim Soo Hwan's deeds than they are just anecdotes about his kind personality. He represented stability, such that it's easy to see by the end why so many people were deeply emotionally moved by his passing. Cardinal Kim Soo Hwan represents the very best ideal a man in his position could hope for. He gave love to the world and wasn't really rewarded with it so much that he just understood. His life, even in the mires of conflict, was a very peaceful one.

All of this serve to make "The Cardinal" an unusual film. It has exactly the correct appearance of a traditional documentary, with unmoving cameras, direct interviews, and relevant televised footage spliced in. But none of this is in the service of objective truth. "The Cardinal" is openly about the subjective judgments people made of Cardinal Kim Soo Hwan as a human being, and how he lives on memory. Given the basically religious work the man dealt in, this makes for quite the poetic statement on what any person of faith should aspire to.

"The Cardinal" is directed by Jeon Sung-woo-I