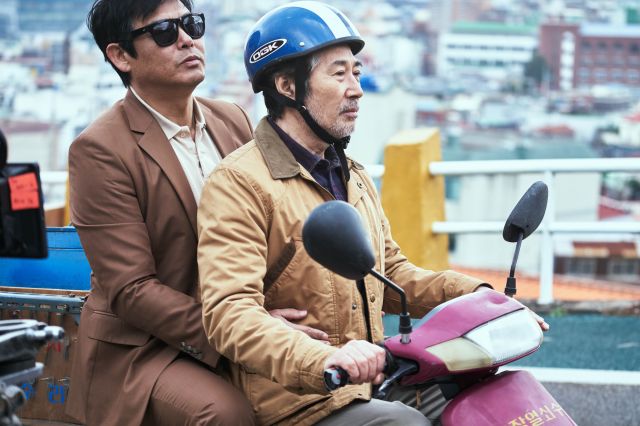 The South Korean suicide rate is top-heavy to the older part of the population. Elderly people in South Korea frequently suffer depression due to middling contact with their families and financial issues relating to housing controls. I bring this cultural context up because "The Chase" starts out with elderly serial murder victims being misidentified as suicides, which is kind of counter-intuitive without said context.

That and more early exposition creates the interesting implication that the serial killer villain of "The Chase" was practicing on people with little ability to fight back before getting to the real target. That said murder victims were not immediately identified as such by the police was also a big boon. Unfortunately standard serial killer tropes are in play for "The Chase" so don't expect the final denouement to be anywhere near that well thought-out.

"The Chase" also suffers from a lack of plausible suspects. Elderly landlord Deok-soo (played by Baek Yoon-sik) is the main perspective character, so unfortunately he's off the list right away. Mind, everyone still blames Deok-soo for the deaths, and he becomes a sort of martyr, which proves awkward. Interpreted literally the movie's message appears to be that blaming suicide rates on landlords is unfair, considering that suicide victims were actually murdered by someone else. Cringeworthy a political statement that may be, "The Chase" isn't a political movie so I'll just leave that aside.

The bigger problem is former detective Pyeong-dal (played by Sung Dong-il). Well, OK, that's an awkward way to phrase it because Pyeong-dal is actually the best character in the movie. He's recently retired, desperate to be useful, and also possibly totally crazy. If Pyeong-dal had been the main character everyone, including Pyeong-dal himself, is a possible suspect, and there's also the possibility that there weren't actually any crimes committed at all because Pyeong-dal ever so desperately wants to play hero one last time.

It's not just Sung Dong-il's loony performance that gives this impression. The script inexplicably gives Pyeong-dal both the best motivation and the best plot twist, all of which ties neatly into his backstory. What does Deok-soo get by comparison? Actually I can't really think of anything. Old age notwithstanding Deok-soo is a surprisingly generic protagonist who aside from the martyr complex, and also knowing the victims on a personal level, doesn't really have any business trying to investigate the crime on his own at all. Even there, Pyeong-dal practically has to drag Deok-soo into the story.

My critique here is a bit harsher than I would like- as a standard mystery thriller "The Chase" is actually reasonably fun. I enjoyed it while I was watching it, and up until everything about the serial killer was actually explained the story elements felt tight enough that I thought the explanation was going to be a convincing one. Unfortunately "The Chase" is the kind of movie where the screenwriting flaws tend to linger on in memory, long after the adrenaline of the more intense action sequences has faded. Still, that rush is good while it lasts.