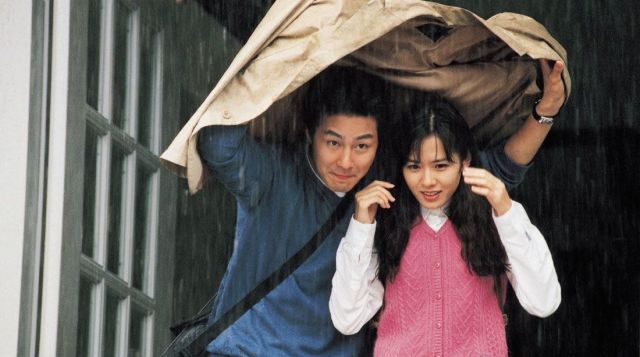 The immediate standout quality of "The Classic" is its musical score. The sound weaves effortlessly between classical beats and more modern ones, marking a constant shift in situations. In the rustic countryside of South Korea, a certain beauty is built up to by the slowly rising frequency of the tones. Meanwhile, city life moves according to a quicker more modern beat. In either case, the quality of the sound reflects that same feeling of general life, of being young, and the hopeful optimism that's all too infectious regarding those bygone days.

Then actual conflicts start showing up in the story and all this stuff starts to get rather weird and annoying. "The Classic" clocks in at over two hours long. Perhaps not that extreme, given that technically this is two love stories rather than just one. But almost all of the emphasis is on the couple in flashback- Joo-hee (played by Son Ye-jin) and Joon-ha (played by Cho Seung-woo), who after a memorable idyllic day are separated, meeting later under rather awkward circumstances.

As good as the musc is in "The Classic", there are only so many variations of "one person stands by pining for their unacquirable love" that I can fully tolerate before the sheer repetition starts to drive me insane. Especially since, as is required for maximum dramatic potential, Joo-hee and Joon-ha really do love each other it's only circumstance and deliberate miscommunication that's keeping them apart.

The film also repeatedly up the stakes by forcing its characters to go through increasingly extreme and outrageous melodramatic events in order to keep the catharsis up, to the point that it's practically self-parody. One late scene takes place in Vietnam of all places- I think the shooting was actually done in the Philippines, but in the context of the story the difference isn't a significant one. "The Classic" is a movie filled with romantic gestures so extreme it just makes me want to watch something less deliberately calculated, something less unreasonable in terms of its general romantic expectations.

I mean, how could any real-life couple possibly live up to these horrific contrivances? Yes I know it's fantasy but still. It's difficult to relate with the problems any of these people have when the situation is so far gone. Fortunately some levity is to be had with the present day storyline featuring Ji-hye (again played by Son Ye-jin) and Sang-min (played by Jo In-sung). However these two are not the significant focus, and the way the two storylines must inevitably meet eventually puts a damper even on that moment of levity.

Good as the music is, it can't save "The Classic" from its own overreliance on heavy romantic cliches. Though I must admit some fondness for the way love letters are presented here. A significant plot point is made of the idea that spiritual emotional connections are very important, possibly even more important than physical chemistry. It's a strong idea, and one of the film's best concepts is the way deceitful letters are used to try and grant other people happiness- the nostalgia for the written word is almost as strong as what the film has for older music. Still, however interesting these concepts are, it's not enough to solve the other problems rife in "The Classic" ultimately making the movie a technically strong but emotionally weak effort.

"The Classic" is directed by kwak Jae-Yong and features Son Ye-jin, Cho Seung-woo and Jo In-sung.