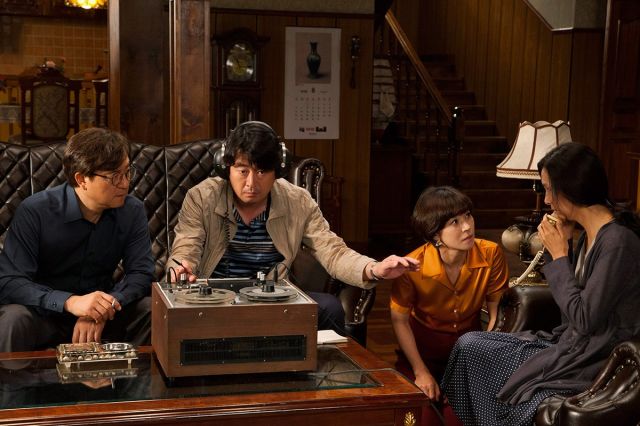 The time is the late seventies in Busan. The South Korean dictatorship is in full swing, but as is often the case, this isn't something that most common citizens necessarily notice on a day-by-day basis. Just because the central intelligence bureau can capture and torture citizens on flippant reasons doesn't mean they can do something more obviously useful like, say, apprehend a kidnapper. That's the main hurdle facing detective Gil-yong (played by Kim Yun-seok). The police just aren't used to trying to find people who are making an active effort to hide.

"The Classified File" is a detective thriller in the classic style- as befits its seventies style. There's nothing in the way of grisly detail. Save for the beginning and the end we don't even have any clue as to how the kidnapping progressed logistically. All Gil-yong really has to go on are the phone calls demanding money. As it turns out South Korea is a very large country and even the dictatorship can't really be everywhere at once.

The political backdrop of "The Classified File" is strange mainly for little we actually see of it. A major plot point involves shaman rituals for the simple reason that a family desperate to get their daughter back will look for help from anywhere- and considering how long it takes for the police to get involved in the first place, it's difficult to blame them. The investigation at the center of "The Classified File" is mired less by incompetence so much as it is by indifference.

This, I suspect, is the real reason why the file was classified. "The Classified File" is based on a real-life incident that director Kwak Gyeong-taek discovered while researching "Friends 2". While major news at the time the finer details were kept secret until a broad declassification sweep long after these events had been forgotten. Petty infighting among departments working for the same government doesn't inspire much confidence in the dictatorship.

Which again, has absolutely nothing to do with the generally workmanshiplike devotion of Gil-yong that takes up most of the actual screentime. "The Classified File" is primarily a period film where the fear is in not knowing. The only problem with this is that if we take away the backdrop and the atmosphere, all that's really left is a fairly dry mystery, where standard chase sequences are tense and exciting mainly because Gil-yong has to spend so much time playing telephone.

It's rather telling that, this flaw notwithstanding, I still found "The Classified File" to be a fascinating period piece on true detective work. Maybe it's just because most detective stories these days feel the need to overindulge with gruesome visuals and comically elaborate storylines. There's just something so comparably down-to-earth about Gil-yong behaving like, well, like an actual detective probably should behave, against a criminal of above-average but not superhuman ability. The sense of perspective is a calming one that goes surprisingly well with the usual tropes of the criminal invesigation genre. For that reason, I can easily recommend this movie.