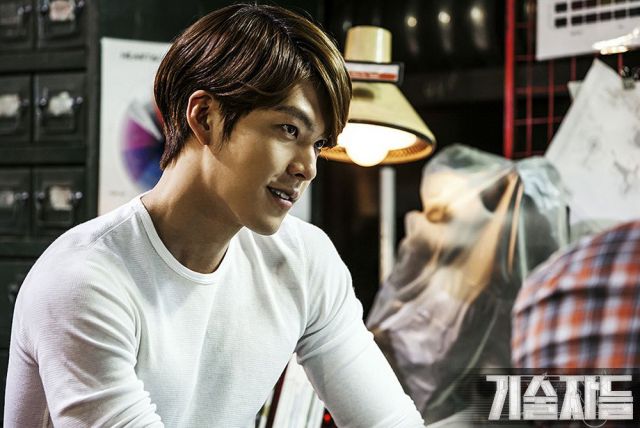 Ji-hyeok (played by Kim Woo-bin) is a master thief, relying on technical skills to steal valuables and replace them with forgeries right under peoples' noses. Inevitably he gets entrapped by President Jo (played by Kim Young-chul) and is forced to commit a master heist. Emphasis on "inevitably". "The Con Artists" takes its sweet time actually getting Ji-hyeok and President Jo into the same room together. So much time is spent on building the characters up that the actual grand heist itself barely takes a few scenes to completely finish.

Then of course, it's on to the next stage of the standard heist plot. The cross, the double cross, and so and on so forth. When I praised "A Perfect Way to Steal a Dog" last week, "The Con Artists" was exactly the kind of movie I was comparing it to. Everything about this film is just so generic. There's almost no heart. Although to the credit of director Kim Hong-seon, at least the movie doesn't waste too much time on irrelevant tangential subplots. That's one silver lining to a story that's this easily scripted.

Honestly it's difficult to justify this movie's existence at all. The main positive point to its favor is Kim Woo-bin. The suave con artist character type is one that gives the man plenty of time to show off some devilish charisma. At one point there's even an all-too brief glimpse of his absolutely fabulous abs. Kim Woo-bin is very explicitly mugging for fans here- he's not portraying Ji-hyeok so much as the Kim Woo-bin brand.

On the same lines, director Kim Hong-seon isn't showing us a story so much as he is a bunch of criminal setpieces. Crawl through the air vents? Check. Distracting the police? Check. Massive battle of hand-to-hand combat? Check. Montage of retrospectively obvious clues that of course perfectly tie up the mystery? Check. Wacky sidekicks who exist less to have their own character arcs so much as to just offer back-up to Kim Woo-bin? Check.

Look, I like Ko Chang-seok and Lee Hyun-woo. Really I do. But their supporting roles are so comically simply here they could just sleepwalk their way through the movie, which is what I suspect they actually did. On one level I can appreciate the dedication director Kim Hong-seon makes to just not screwing this up, like several other criminal enterprise flicks from last year that devolved into a mess by getting too over-complicated. Even granting this it's hard to avoid rolling my eyes at something so overdone as the leading lady who exists solely to inevitably be rescued.

I can't really bring myself to hate "The Con Artists", because nothing about it is explicitly bad in any way. It's entirely possible that those of you who don't normally watch heist movies will be surprised. And probably those of you who really love Kim Woo-bin will also be mostly satisfied. On objective merits, though, there isn't really anything all that outstanding or noteworthy about "The Con Artists" to warrant discussing, and I can't personally recommend it.