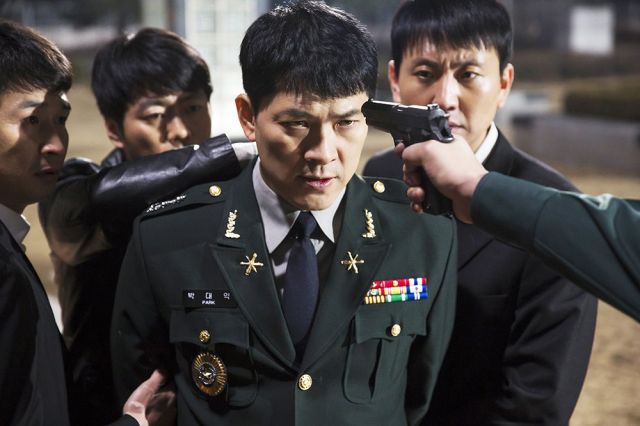 The year is 1999. Jeong-sook (played by Kim Ok-vin) is a reporter waiting for a contact at the amusement park. Everything about the situation is suspicious and by the time aeronautic parts procurement officer Dae-ik (played by Kim Sang-kyung) makes an appearance, Jeong-sook is convinced powerful forces are trying to kill them both. Why would anyone be upset about an aeronautic parts procurement officer talking to the press? Well, that question is the main draw of "The Discloser", a movie about military industrial graft.

The apparently victimless nature of the crime is another strong enticement. There's just one problem. Occassionally, there are victims, and that's how Dae-ik got dragged into the role of whistleblower. Dae-ik is a sincerely patriotic soldier who received his promotion based on merit. The new corporate culture at the office Dae-ik manages strongly encourages people to not ask questions about how these deals are conducted. That prospect is odious to Dae-ik, who is unwilling to besmirch the reputation of a fellow patriot when his death may actually have been caused by faulty equipment.

That's what the military industrial complex does. When the secret deals are sancrosanct, it's the low level soldiers who have to take the fall when something goes wrong. This is a very disgusting underdiscussed issue with advanced military beaurocracies. Note how in the previous paragraph I used the term corporate culture to describe a military office. What a nightmare that conjures up- imagine the company in Dilbert being put in charge of weapons of mass destruction.

The real-life events which inspired "The Discloser" are more critical in modern South Korea history than anyone would much to like to admit. Even in the late nineties the military had free reign to mostly do whatever they wanted- public reporting of a scandal like this was a major milestone in the evolving freedom of South Korea's media. Unfortunately the specific crime remains a common hallmark of public corruption. A news report in the credits sequence reminds us that Sewol was also repaired with faulty spare parts, for the same reasons.

Even if the lessons in recent South Korean history or military industrial graft aren't good enough for you, "The Discloser" also has some fairly on-point lessons about what it means to be a whistleblower. Dae-ik is stonewalled and bullied at every turn in his efforts to call attention to wrongdoing, and is forced to consorting with Jeong-sook to gain any semblance of justice. Next time some idiot talking head says that the whistleblower should have gone through the system, just keep that in mind. Powerful people don't like being told what to do.