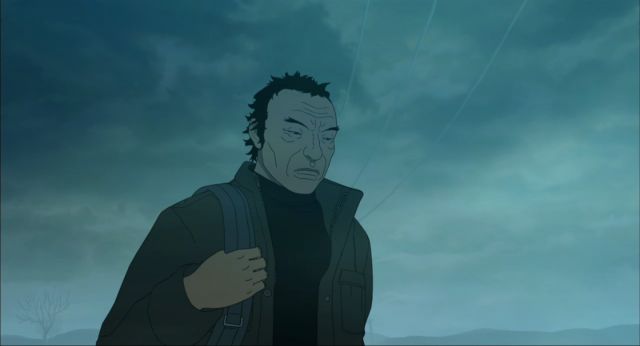 In the spotlight this week: Yeon Sang-ho's "The Fake"…

There are no heroes in Yeon's dystopian dreamscapes. Within both "King of Pigs and "The Fake" you'll find worlds that resemble the life-sustaining mush under a moist log, dank ecosystems alive with poisons and pessimism; here is where Yeon's Pigs wallowed, and then, in 2013, he sent three haunted men to a ghost town for a mexican meltdown.

"The Fake" pivots around three men: a reformed pastor, a slick charlatan, and a gnarly and cynical thug. This is similar to the trio of testosterone found in "King of Pigs", but here our lead's pasts are chasing them down like dogs. A small rural town is to be flooded to make way for a municipally approved dam, and its religious flock are in need of a guiding light as they sell their land and relocate. The young and handsome Reverend Sung, a popular miracle maker in this small community, is strong-armed into allowing a slick city charlatan qua preacher to take advantage of the townsfolk's plight. These God-fearing folk hand over their savings hoping that they'll be one of the chosen 144,000 to make it into heaven via this God-given wolf in sheepskin.

And while the wolf is salivating over the religious nuts he's about to crack open, a gruff and gnarly ghost walks out of the mist and into the fake shepherd's scheme. Min-chul (Yang Ik-june) is a violent drunk and a horrible gambler, the cancerous black sheep of this town, and he's returned to trouble his wife and daughter with his demonic demeanour. He steals his daughter's college savings to gamble with, beats his family, and ends up picking a fight with the Town's false saviour in a bar. Our anti-hero is then clobbered with a brick in a bathroom, and from then on this tenacious brute makes it his life's mission to hunt down and expose this devilish deviant and remove the wool from everyone's Christ-crazed eyes.

It doesn't end well. The world in which Yeon's characters combust is fatalistic and absent of divine attention (no deus ex machina to hope for here, and Yeon's quite happy to bury his characters alive). What we get when we sit down for this sophomore screening is a window on decomposition: a tragic time-lapse that (morally) decays right before us. Talk of hope is a heretical in such a place and the style is suitably stiff, too. The lurid and lavish landscapes found in your typical mainstream animation have been beaten and butchered here into a bleak abyss of putrid pastels. At times the compositions appears almost pleasing, but the subject matter is morbid enough to quickly soil such scenes, even the faces (particular that of Min-chul) seem scarred and scratched for effect.

The film opens with a hammer to a hound's head, a telling prelude that ushers in the film's violence unapologetically. Welcome to Yeon's world: a place that looks and behave like our own, but behind the animated allure of Yeon's cartoon creations lies a revolting reality oozing with misogyny, corruption and cruelty. Personally, I enjoy a healthy dose of dark matter in my Korean cinema, and when it's coated in cartoons it's all the more delightful. "The Fake" is quiet obviously a bleak and shadowy flick for consenting adults, and its unlikely to appeal to those who enjoy delightful dénouements and sweet dreams. "The Fake" is nightmarish and nasty, a pessimistic piece of social commentary that insists that everything is not going to be okay. Enjoy.