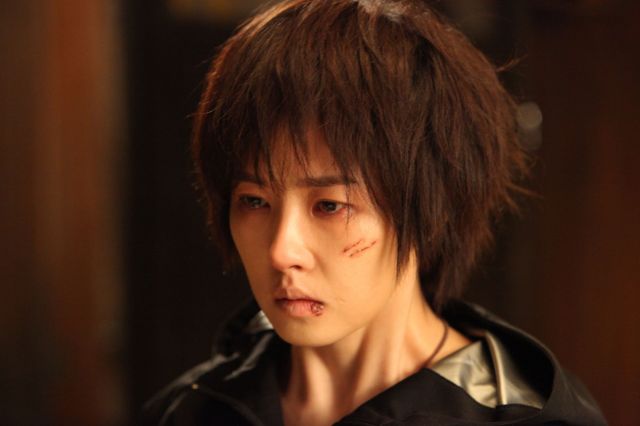 The title characters in "The Five" aren't nice people. I don't mean they ignore social conventions to get the job done- I mean they're spiteful jerks who only really care about helping themselves and family members they personally know. Once, things might have been different. Certainly Eun-Ah (played by Kim Sun-ah) was once a happy functional person before tragedy wrecked her life. But once those days are gone, they're gone, and she doesn't have much to live for.

The other members of the retinue aren't quite as far down the rabbit hole, but it's very telling that our first exposure to them indicates people in emotional misery because they're trapped in situations they can't solve. While Eun-Ah's quest is one for justice, the vindictive streak in these people makes for a team that doesn't function especially well, and causes them to make bad mistakes.

"The Five" constantly inspires tension in its portrayal of an uncaring universe. It's extremely engaging in commanding the viewer's attention- it has striking visuals, which are apt for a sudden gruesome change at nearly any minute. Most of the setpieces are common to the genre of hunting down the solitary serial killer- it's to director Jeong Yeon-sik's credit that the film's camerawork is stylish enough to accurately mimic the intensity of the webtoon the story comes from.

This should be no major surprise, given that Jeong Yeon-sik also wrote the webtoon. I haven't read it myself- but I'm familiar with the genre and I expect the adaptation is an accurate one. Though this isn't always necessarily a good thing- the sound design isn't as effective as the visuals, and in a few points it begs disbelief that characters only a room or two away didn't hear certain loud noises.

I'm also not totally sure what to make of villain, Jae-Wook (played by On Joo-wan). He represents most of the typical serial killer tropes to a tee, right down to being so basically invincible as to be able to recover from multiple severe beatings that would knock out other characters completely. It also feels problematic that he's so comparatively successful- this fact makes it difficult to imagine that Eun-Ah's ultimate revenge can really feel all that satisfying, given all that's been lost.

For what it's worth, the ending does deliver quite well, general reliance on invincible serial killer tropes notwithstanding. It's hard to imagine what could mentally destroy a sociopathic serial killer but- well, I'm not going to ruin it. The ultimate justice is frankly hilarious in how obvious it was, and the visuals it inspires are just as good. Similarly, it would seem that things probably turned out best for Eun-Ah after all. There's only so much spiritual degradation a person can take before matters just don't even make a difference anymore- the absence of the police here is less a societal statement as it is one on Eun-Ah's character, who has chosen to become a certain person and is prepared for the ultimate consequences.

This isn't necessarily the most creative or inventive idea, and there's relatively little about this movie to reflect on in broader social circumstances. Regardless, "The Five" is excellent work- an exciting thriller with all that could reasonably be asked for. There's more than enough emotional punch and thrills here to justify a watch for any moviegoer.