[HanCinema's Film Review] "The Grand Heist": Catch it When you Can! 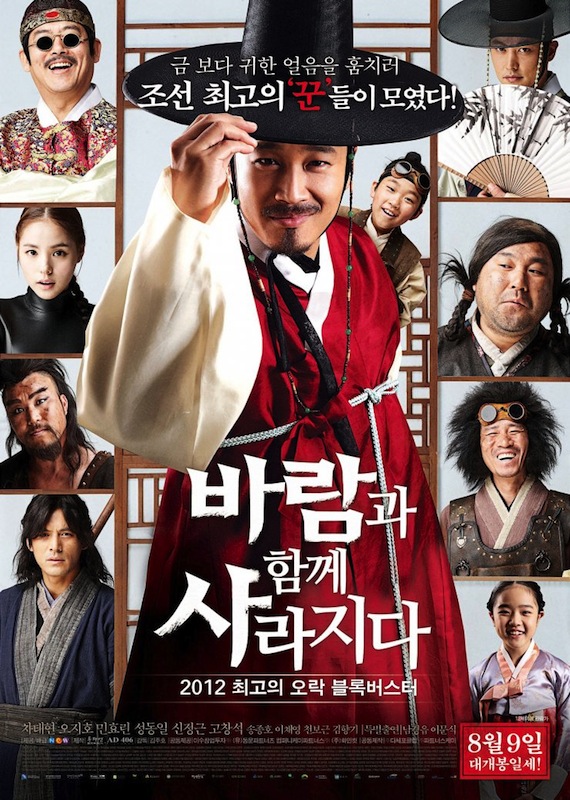 Kim Joo-ho's first major feature "The Grand Heist" came into the charts last year when "The Thieves" had just hit its stride. Despite coming up against the likes Choi Dong-hoon's record-breaking hit, along with a few other money-makers both foreign and domestic, the film pulled together 4,909,937 admissions without ever being number one. That's a tally worthy of forth place in the list of highest grossing Korea films of 2012. A list led by "The Thieves" (12,983,182), followed by "Masquerade" (12,319,390), and that places Kim's heist flick almost two million behind "A Werewolf Boy" (6,654,390).

The film is set during Korea's favoured Chosun period, and here the royal family have control over the production and distribution of ice. In Kim's telling ice becomes a highly sought-after commodity that represents the indulgence and decadence of the rich and powerful, as well as the hopes and needs of the weak and in need. Jo Myung-soo, a royal nobleman played by Nam Kyung-eup, decides to put in motion plans that would give him exclusive rights and power of the ice trade. However, to do this he needs to take care of the resourceful and reckless Deok-moo (Cha Tae-hyun), and his dutiful father, as well Dong-soo (Oh Ji-ho), a skilled and incorruptible public office who watches over the ice warehouse and its workers.

As Myung-soo's plans take shape (having arogantly trample on all those who oppose it), Deok-moo and Dong-soo team up and form a group of elite professionals to steal tons of ice from this greedy nobleman. It definitely plays off some of the edginess of the hesit genre, as many of its features and motifs would have already been cemented into the public's mind with films such as "Ocean's Eleven". The film especially draws off of its quick wit and captivating pace and rhythm, as Kim's filml plays out in front of a potent jazzy, yet memorably eclectic, score. Plans and preparations to raid the storehouse are sharp and captured through a variety of comical montages and slick sequences, many of which were excellent produced and really injected a familiar sense of adrenaline and pace into the heist.

In fact, film's presentation overall is fantastic. From its introduction animation and title sequence the viewer is made aware of the high standard the production team was holding itself against. The CG was professionally and appropriately inserted, and was, happily, never abused and only accented and added to the already captivating on-screen action. I was continually impressed as, seemingly from nowhere, another beautiful action scene graced the screen. This makes "The Grand Heist" really deserving of your attention, and if not through its sheen of its visuals, then at least through its stars.

This mix of talent was led by the film's two man stars: Cha Tae-hyun and Oh Ji-ho. Cha Tae-hyun has been busy with a number of cameos in a few dramas over the past two years, but his last appearance in a film was in Lee Hwan-gyeong's horse racing drama "Champ" in 2011. He shares the limelight with the imperturbable and dashing Oh Ji-ho. He too can usually be found on the small screen and has really improved on his movie choices as his previous film, "Sector 7", would not have been a highlight for him.

In addition, film was littered with great performances from a number of other skilled and much welcomed stars. These include Min Hyo-rin, Lee Chae-young, Sung Dong-il, Ko Chang-seok and Song Jong-ho to name but a few. I believe most will find that is ensemble works better together (or at least seemed to onscreen) than the team involved in "The Thieves". The jokes and drama seemed to fly naturally between them all, which, when paired with its fresh and witty story writing, kept the intensity high and the laughs regular. Catch it when you can!