[HanCinema's Film Review] "The Houseguest and My Mother" + DVD Giveaway 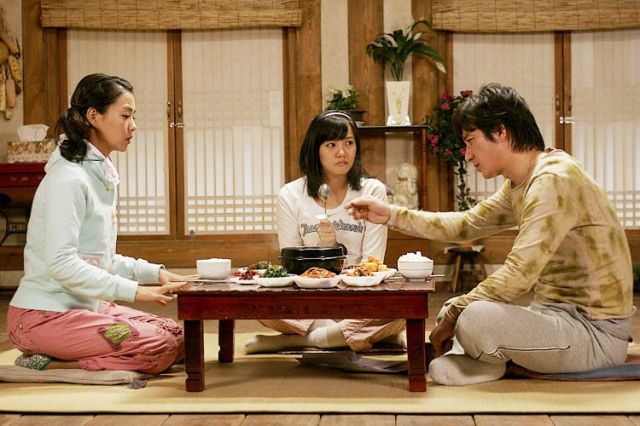 Duk-geun (played by Jung Joon-ho) is a low-level crook who chances upon a fantastic opportunity when an old woman comes to his office requesting the services of a private investigator. Meanwhile, Ok-hee (played by Ko Eun-ah) is a teenage girl who deals with the usual teenage girl problems of trouble with peers and an embarrassing mother, Hye-ju (played by Kim Won-hee), who looks young enough to be Ok-hee's sister. Well, at least that's what it says in the script. Kim Won-hee was thirty five when "The Houseguest and My Mother" came out, but her character is supposed to look under thiry.

While Kim Won-hee doesn't look under thirty she does convincingly act like an under-thirty woman. Most of the movie's best laughs are a result of the contrast between Ok-hee trying to be a grown-up while Hye-ju insists on acting like a child. There's a great visual with the two women wearing each other's clothes and looking tremendously awkward and weird in the process. The parts where Ok-hee and Hye-ju are sniping at each other are great.

Then Duk-geun has to be integrated into the larger story and that's where "The Houseguest and My Mother" begins to falter. Remember the elderly woman who appeared in the premise? Something awful ends up happening to her. While Duk-geun does ultimately end up repenting, this arc feels rather hollow because it only happens due to Duk-geun shallowly becoming concerned over his romantic entanglement with Hye-ju. This, too, you have to remember, was originally just a part of another mean-spirited scam.

Duk-geun does actually work fairly well as a sort of ineffectual villain, but for whatever reason "The Houseguest and My Mother" forces itself to stay on track for a conventional happy ending. But with Duk-geun being ethically challenged while Ok-hee and Hye-ju are just sort of dumb, none of these characters can resolve any story conflicts on their own. The gangsters giving Duk-geun end up being defeated by a random trap that was originally set to ensnare Duk-geun yet for whatever reason never got taken down.

There's a very morbid sense of humor in that scene, yet where morbidity is called for most "The Houseguest and My Mother" is weirdly optimistic. Hye-ju dropped out of high school to have a kid, cut off contact with her family to raise said kid on her own and yet...she has a fairly robust savings account? Huh? It's almost as if "The Houseguest and My Mother" is trying to say that being a teen mom is no big deal, while still paradoxically making comedic hay of Hye-ju's general naiveté and immaturity.

Scene by scene "The Houseguest and My Mother" isn't all that bad. There are plenty of decent comedic moments and really, when the whole premise is "remake a classic Korean film except make all the characters idiots", a fairly low set of expectations has to be placed. But however I try to cut it, "The Houseguest and My Mother" just does not function as a cohesive story. For that reason, I cannot recommend this movie.

"The Houseguest and My Mother" is directed by Lim Yeong-seong and features Jung Joon-ho, Kim Won-hee, Ko Eun-ah and Im Hyung-joon.

The Houseguest and My Mother DVD

"[HanCinema's Film Review] "The Houseguest and My Mother" + DVD Giveaway"
by HanCinema is licensed under a Creative Commons Attribution-Share Alike 3.0 Unported License.