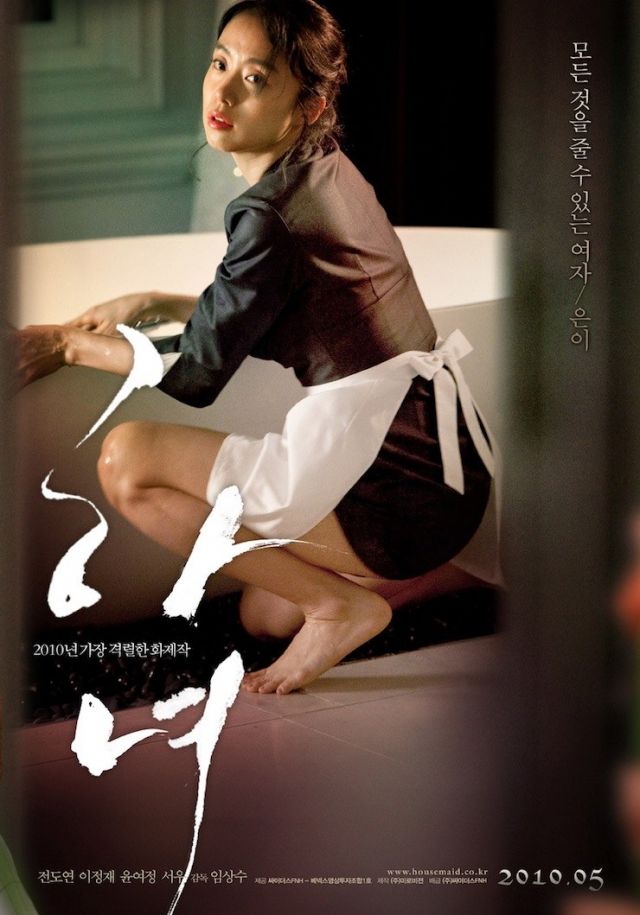 As soon as I had finished watching "The Housemaid - 2010" (2010, Im Sang-soo), I became eager to watch the 1960s original. I was surprised to find that it differs rather drastically from its modern remake. In fact, one can barely call the 2010 version a remake at all. Despite the dramatic differences, both films are worthy of praise and warrant examination as products of their respective eras.

The Story and Characters

The opening scene in The Housemaid is gritty; a busy Korean street is shown unpolished and raw. Steam engulfs the screen as a street vendor prepares her food, fires are poked ready for restaurant tables, large crabs are pulled from their street side holdings, all the while a young girl stands above the bustling streets and jumps to her death. Eun-I (Jeon Do-yeon) and her friend then pull up on a scooter and gaze upon the haunting chalk outline.

Eun-I is our housemaid. After a thorough screening process she is offered a job at an extremely wealthy household. Her employers are an upper-class couple with a young daughter and twins on the way. The lady of the house (Hae-ra played by Seo Woo) lives a luxurious life free from work. She spends her time reading, enjoying relaxing baths, and pampering herself with the assistance of the helpers.

The senior maid (Youn Yuh-jung as Byeong-sik) has worked for the household for a number of years. She is well informed of all the mansion's happenings and it is she who assists Eun-I in adjusting to the couple's lavish lifestyle. Youn Yuh-jung's character was not in the original, but her presence is justified in this contemporary version. As both rat and mentor, Youn Yuh-jung's character undergoes the largest change from beginning to end.

The new maid is also introduced to Hae-ra (Ahn Seo-hyun), the couple's adorable daughter. She is the embodiment of innocence and naivety in the film. She develops a close and personal relationship with Eun-I, and throughout the film, their relationship almost exists outside the tragic consequential eventuality of the story.

Hoon (Lee Jung-jae) is the master of this house. His stern demeanour is paired with his dominance over the household. As his wife's mother (Park Ji-young) describes, this is a man who has had everything he has ever desired from birth, a silver-spoon baby whose social standing makes him an unapproachable and commanding figure. One night, his wife fails to fully satisfy him, being very pregnant with twins, and his gaze soon turns to Eun-I. 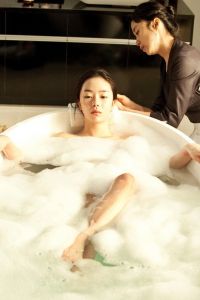 Late in the night he strolls down to her quarters, wine in hand, and boldly makes his advances. This is one of the biggest differences between the classic and the modern version. While in the original the viewers' sympathies lie with the couple, sinisterly manipulated by the maid, here we are behind the naïve and likable Eun-I. Although she more than meets Hoon halfway in this scandalous affair, her credulous characterisation and misplaced sensibility discourages viewers from distancing themselves from her.

The affair results in Eun-I becoming pregnant and, through the lips of the senior housemaid, the madams of the house become aware and take action to minimise the scandal's impact on their cushy lives. Eun-I is bribed and assaulted, but she ultimately decides to keep the unborn child. This is unacceptable to the wife and her scheming mother and together they heartlessly deal with them both. Devastated by their scheme, Eun-I decides to take matters into her own hands and does the unthinkable.

Its bizarre final scene initially seemed at odds with the rest of the film, but ultimately provides a meaningful message on the future of the household. Life at the Hoon manor will continue, with Eun-I's final act only really affecting the young girl with whom she shared so much. It is with Hae-ra that Eun-I's message lingers, her naivety shattered, as she stands present in, yet emotionally detached from the spectacle that is her life.

The Housemaid contains some intriguing nuances that heighten the dramatic intent of this modern film. It's a fascinating contemporary examination of social roles and class, albeit in a fairly narrow context. I enjoyed what The Housemaid had to offer and its melodramatic instances were generally effective and complementary to its themes. It's an excellent film that's definitely worth a watch.