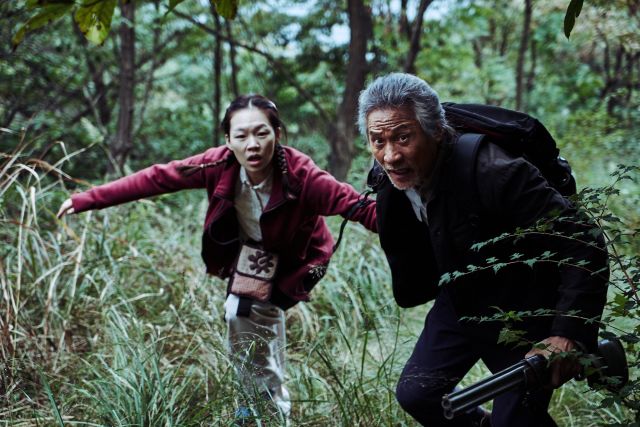 In the rural mountainside an ominous crack of lightning strikes atop a grave marked by a twisted gnarly tree, as eerie whistling sounds portend that the thunder has not revealed a gift from beyond, but a curse. That's the opening scene of "The Hunt" which should, by all rights, have set the stage for a far more satisfying and frightening film, with men driven mad by a lust for wealth engaged in an endless duel. Unfortunately the execution leaves a lot to be desired.

The main obvious flaw with "The Hunt" is that the story is excessively complicated. Tracking the character relationships quickly gets to be exhausting. But it doesn't even matter. Gi-seong (played by Ahn Sung-ki) realizes that bad guys with guns are on the mountain and decides to get involved because he's a good guy with a gun. There. That's it. That's all we needed. Why did the production team feel it was necessary to insert all these flashbacks exploring characters who died several years before the movie's opening scene?

The logistics are pretty confounding too. At one point a long distance weapon misses even though the target had been unmoving for several minutes, but the target is able to score a hit using a sidearm at the same range off the cuff. Later on the scene transitions from a chase in the woods to a confrontation at a stream, with no explanation being offered as to how the running target was able to cross the river without being shot at.

These basic continuity problems pile up into absurdity the longer the movie goes on. Late in the movie the backdrop transitions to night (which incidentally makes it almost impossible to see what's happening), and apparently the band of guys who only thought they were going to be on the mountain for thirty minutes brought rifle flashlights. People who have never seen this mountain before easily locate locals, yet a whole police crew is unable to find a single living person until dawn. Cho Jin-woong plays twins, for no reason I can think of except to make it hard to figure out which twin he's playing at any given moment.

The few interesting ideas "The Hunt" has are also unceremoniously abandoned with little thought. It takes awhile, for example, for "The Hunt" to start because all of the characters, Gi-seong and the villains included, don't really want to kill anyone. They change their minds not due to a change in the situation, but because...you know what, I don't actually know. They just decide cold-blooded murder is OK all of a sudden, even if it's friendly fire.

"The Hunt" is really a bit of a case study in how such a simple idea can be made so manifestly unwatchable. How exactly can a movie about a bunch of men on a mountain fighting each other with guns manage to be so incredibly ignorant about both guns and mountains? More than anything else "The Hunt" is just frustrating- a genre film that tries too hard to be a serious drama and inevitably fails at both.