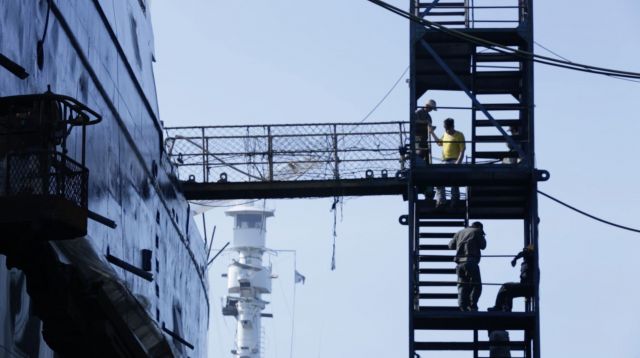 Not to be confused with "Shadow Island", "The Island of Shadows" does offer a similar perspective about a seemingly random, obscure part of the South Korean landscape- it too, a portrait of the Yeongdo district in Busan. But where "Shadow Island" was a fictional depiction of the malaise of an urban wasteland, "The Island of Shadows" is a documentary that deals with hope in the midst of darkness- it's the story of the Hanjin shipyard worker's union.

Initially "The Island of Shadows" is a simple portrait of solidarity. While the union's activities ultimately end up having a predictably political slant, what initially unites the various workers is just, well, just the fact that they like each other. They're not just a motley band of blue collar workers in it for a paycheck. They all came to Hanjin shipyard because of similar hopes and dreams for living a normal life.

The real irony, though, is that these hopes and dreams were obviously borne from South Korean propaganda about the country's love of freedom. Back during the eighties this was more an abstract hypothetical than an actual real-life working condition, so they end up having to fight, and fight, and fight. Mild real-life spoilers- the union never really "wins" against Hanjin. Even as time progresses away from the last South Korean dictatorship into dubious democracy and finally a political ruling power not affiliated with past dictatorships, the struggle remains borderline unwinnable.

The ultimate most insulting swipe is when Hanjin announces a new project in the Phillipines for the sole purpose of trying to curb domestic labor union impulses. The contrast to the newsreel propaganda of the earlier part of the film is rather striking. Whenever sacrifices were necessary "for the sake of the Korean people", Hanjin shipyard workers were expected to happily oblige any hardship. Yet evidently Hanjin itself only owes its loyalty to the almighty dollar.

What director Kim Jeong-Keun really emphasizes is that the Hanjin shipyard workers are, themselves, the Korean people. Contrasting the faces of the union with the faceless corporation begs a lot of questions about what exactly the Korean people were fighting to accomplish during all of those years of dictatorship. The documentary proves to be very informative, not just with the facts of this union's history, but also in underlining the emotional sentiment that allows organized labor to be a potent political force to this very day, as was demonstrated in parliamentary elections earlier this year.

It's very much worth noting- even for South Koreans, stories like what we see in "The Island of Shadows" are almost entirely obscured from public view. Even horrific events that by any rational logic should get major news coverage never do because...well, because the freedom loving country of South Korea, like most other freedom loving countries in the world, has ways of restricting information that do not fall under the traditional definition of censorship. That only makes "The Island of Shadows" all the more essential viewing for anyone who wants to understand the historical, political, and emotional context for South Korean labor unions.

"The Island of Shadows" is directed by Kim Jeong-Keun.

"[HanCinema's Film Review] "The Island of Shadows""
by HanCinema is licensed under a Creative Commons Attribution-Share Alike 3.0 Unported License.