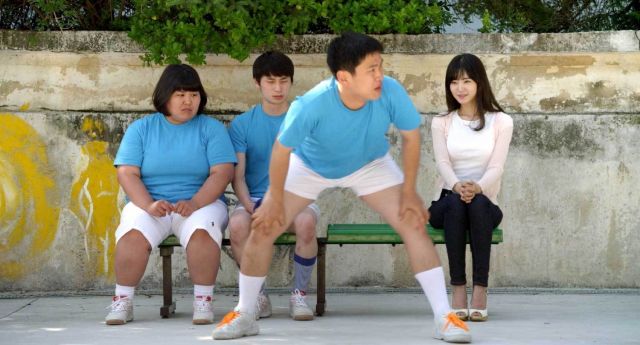 Jokgu is just the Korean word for the game of foot volleyball. Foot volleyball is exactly what it sounds like- volleyball played with the rules of soccer. No doubt this sounds like a perfectly enjoyable way to spend time with friends, hence its popularity with young Korean men. Consequently, Man-seop (played by Ahn Jae-hong) expects that getting his new college to set up a foot volleyball court will be an easy task. Well if it were an easy task then there'd be no movie.

"The King of Jokgu" catches something excellent about the university experience that a lot of stories in this setting miss- the sheer inertia. College students, far from being genuinely excited and curious about new things, for the most part are fine moving along with whatever the current trends are. Getting them to do something they don't already want to do is akin to herding cats. There's excellent dark humor at play here where Man-seop's efforts are foiled again and again by the sheer apathy of the student body.

Then at about the halfway point all this backdrop is ignored so that the movie can instead cover every possible trope normally used in the typical college sports story. There's a tournament, villains, local enthusiasm, and a cast that's chock full of colorful characters, each of whom have their own arc. This is not necessarily a good thing. When I can count seven character arcs, only one or two of which have had any actual meaningful development, well, what kind of a story is that?

This is the main problem with "The King of Jokgu", is that even though it has lots of characters and an obvious story trajectory, there's almost no serious sese of urgency to any of it. Multiple romantic subplots exist mostly just for the sake of existing. The literal message of the movie appears to be that the game of foot volleyball is a good way to find a romantic partner. Unfortunately this message isn't developed clearly or absurdly enough to be anywhere near as funny as that sentence makes it sound.

Then again, technically, I think the literal message is actually about making the most of your youth. But this message is even less developed than the romantic one mostly because it shows up sandwiched between one plot twist involving class audits and another one involving time travel. Neither one of these makes a whole lot of sense, and the ending, complete with an incomprehensible fakeout, only adds to the general sense of bewilderment.

In any case, "The King of Jokgu" should to some extent be evaluated for the target audience- people who want to see a movie involving a college university and the game of foot volleyball. I know you're out there somewhere- believe me, there's many a movie I've gotten excited for simply because it has a weird and novel-sounding premise. And "The King of Jokgu" is definitely that movie. It's just, not really much more than that. This is a film with novelty value that might make it good for a laugh in the moment, but don't expect anything more substantial.

"[HanCinema's Film Review] "The King of Jokgu""
by HanCinema is licensed under a Creative Commons Attribution-Share Alike 3.0 Unported License.