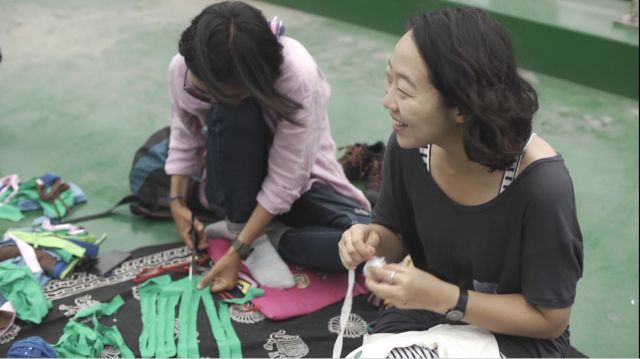 Have you ever been looking for more social interaction in life, and decided that hey, why not make a social group with your co-workers? And what if over the process of crocheting together, you talk about the kind of workplace you want to see? Say you want to do it in a more sustainable way. Or that you want more labor rights. Or that you just want to be more well-rounded people in general. All of this builds on itself until one day, you've got enough material for a documentary? That what "The Knitting Club" is all about.

From the very beginning "The Knitting Club" is very structurally confusing, well befitting its genesis as a sort of scrapbook for the titular social group. No subtitles explain who the various dramatis personae are, so the viewer is mostly left fumbling in confusion trying to figure out what their relationships are to each other. It takes an embarrassingly great deal of time just to establish that they all work at a travel agency, and I'm still not sure what exactly their business plan was supposed to be.

Nor was I able to clearly ascertain what exactly the purpose of all their domestic travels were. As if usually the case for independent Korean film these days, there are leftist elements at play in "The Knitting Club" as in the process of trying to enrich their lives, the women become interested in political causes like Sewol or the "Miryang Arirang" protest. Really, it's little surprise that the women in "The Knitting Club" should become more politically leftist through their conversations, even as they like their boss, because ugh, the South Korean government really has been completely awful.

Be that as it may, this is no excuse for director Park So-hyeon to be so incredibly vague when it comes to framing events in the documentary. To someone not already familiar with the business and political climate in South Korea right now, most of what happens in "The Knitting Club" will at best come off as a complete non sequitur. Gigantic short cuts are taken when it comes to explaining motivation.

This is largely a result of filmmaking intent. I suspect that director Park So-hyeon thought "The Knitting Club" was a good idea because these conversations sounded interesting to her. In context most technical discussion does sound interesting, because social groups are a complex organisms that inevitably interact with the outside world in ways that are positive or negative depending on open they are to the idea of kindred spirits. And also, of course, whether they can find any.

It's from this vantage point that "The Knitting Club" has had a fairly strong run on the local festival circuit, where the target audience can be expected to have a decent understanding of these issues. Be that as it may, since you're reading this review in English, odds are you barely have any idea what these issues are. So be warned that "The Knitting Club" is a fantastically bad introduction on the topic.

"The Knitting Club" is directed by Park So-hyeon