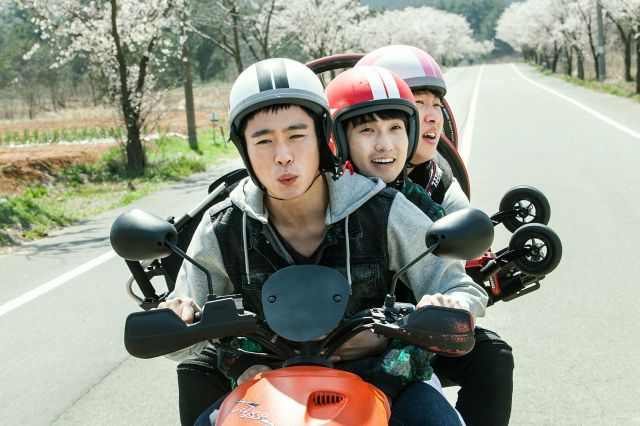 Go-hwan (played by Ryu Deok-hwan) is a teenager who's dying of Lou Gehrig's disease. Fortunately, Go-hwan's head is mostly still functional. As is his...penis. Yes, "The Last Ride" goes there. First and foremost it acknowledges that whatever we may think a person who is about to die wants, when that person is a teenage boy, terminal disease or not, he's going to be spending a disproportionate amount of time thinking about sex.

All of these desires, while obviously well-meaning, avoid asking Go-hwan directly what he wants because everyone is reluctant to tell Go-hwan that he's dying. In time, though, Go-hwan does make his wishes unambiguously known and that's when "The Last Ride" transitions to the second portion- wherein our characters discover that fulfilling Go-hwan's request is much more difficult than it sounds, and is ultimately only achieved with help from the least likely source.

A lot of the fun in "The Last Ride" is just guessing what this least likely source will be, because Nam-joon and Gap-deok run through a lot of them. Slapstick is the constant order of day- no matter what any character tries to do in order to help Go-hwan, they usually just succeed in getting themselves (or Go-hwan) injured in the process. One final last ditch effort involves one of Go-hwan's family members falling to victim to an epic nuclear punch from the most inexplicable of sources.

"Inexplicable" is the best word to describe "The Last Ride" overall. I was not expecting a movie where the main character has Lou Gehrig's disease to be so legitimately funny. The reason the story works is because it flips every possible genre assumption upside down. As it turns out, the power of montages is overrated, and teenage boys have the bad habit of saying and doing the dumbest possible thing at the worst possible time.

The social commentary is also surprisingly strong. One scene involves the Ice Bucket Challenge. Yes, it is perhaps a little late to be criticizing the ice bucket challenge yet even so, the supercilious nature of that event is pretty difficult to ignore when the main characters actually personally know someone who has Lou Gehrig's Disease. Especially given all the physical hardship they've had to go through to actually meaningfully help the kid.

Kid...yeah, as much as I liked "The Last Ride" overall I'm sorry to say that Ryu Deok-hwan does not really look like a teenager, even if he tries his best. Ah, but to try your best, now that goes a long way. While immediate focus is mainly on humor, in broad perspective "The Last Ride" also has that most important element for any sentimental flick- heart. It's that element which makes this movie all too easy to recommend.