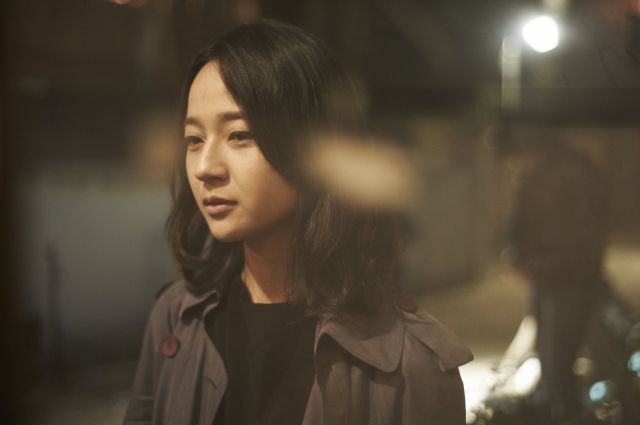 Ah-yeong (played by Kim Kkobbi) is a compulsive liar. Why does she lie? Well, that's...that's a pretty stupid question, actually. Look at her life. Sure, the catty work environment isn't that bad, even if it's not very reassuring. But then we get to Ah-yeong's home life, and see that her family is falling apart. And not in a spectacular way that involves explosive behavior or anything like that. They're just bogged down by their own poverty and incapacity to the point that living has become about breathing rather than doing.

So that's how Ah-yeong makes herself feel alive. She lies, and pretends to be a happier more successful person than she really is. That's what really fascinating about "The Liar" overall, is that the longer the movie goes on, the more reasonable Ah-yeong's behavior seems to be. I've seen plenty of movies about people in Ah-yeong's position and believe me. As weird and uncomfortable as "The Liar" gets, Ah-yeong does at least have something vaguely resembling happiness. For awhile anyway.

What really gives energy to Ah-yeong's lies is, paradoxically, how through the motions they are. For most of us, going to buy something at the department store is just something we have to do when we need something. Yes, the salespeople are nice and friendly- because it's their job to be nice and friendly and they have serious hope of a bonus if they make a really high-level sale, so of course they try to make us feel good about ourselves.

I used to be a mystery shopper, and I can tell you, when everything else in life just seems to be awful, there's just something very pleasant about having a person, anyone, even a used car salesman, treat you like you're a human being who deserves loves and respect. I, like Ah-yeong, used to lie to people all the time. The difference is, it was my job to lie, so that made it OK. And the more I think about it the more bizarre and hilarious that particular aspect of the capitalist system becomes.

Because really, why shouldn't Ah-yeong just lie to everybody? Does she care what they think? Should she care what they think? Does Ah-yeong have any reason to believe that for a minute, even a fraction of a second, anyone would treat her with human decency if she just told them the truth about her miserable life? Ah-yeong doesn't want pity. That's the worst possible acknowledgment of failure. The fact that Ah-yeong never had a decent shot in the first place doesn't make the acknowledgment of failure any less humiliating.

Ah-yeong passive-aggressively fights the miserably depressing consumerist system she's tied to, and the most hilarious part of it all is that Ah-yeong doesn't even know what she's doing or why she's doing it. All Ah-yeong knows is, that the minute she tells the truth, the minute she decides to stop even telling little white lies, that's the minute she might as well disappear in a big bright poofy blast of light. Ah-yeong is nothing without her lies. They're what make her who she is. That's why Ah-yeong is, quite appropriately, "The Liar".

"The Liar" is directed by Kim Dong-myung and features Kim Kkobbi, Jeon Shin-hwan-I and Lee Seon-hee-I