[HanCinema's Film Review] "The March for the Lost" 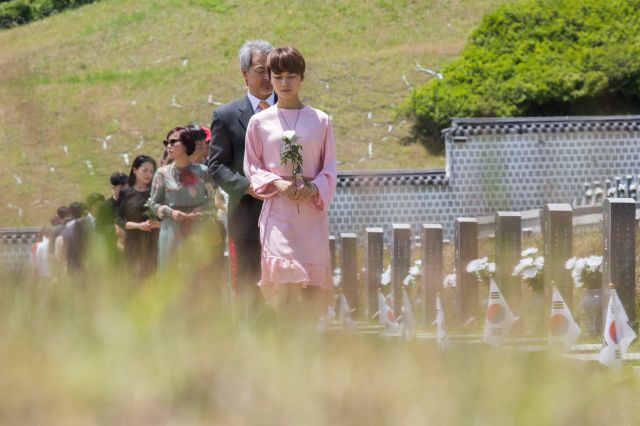 At first glance "The March for the Lost" appears to be an experimental film, as writer/director Park Ki-bok shows us a bunch of weird abstract imagery- mostly imagery related to the 1980 Gwangu Uprising interspered with Swan Lake. Then we're in the present day. Hee-soo (played by Kim Kkobbi) is getting married, yet somehow or other her senile mother Myeong-hee (played by Kim Boo-sun) has escaped from what appears to be a mental institution with very bad security.

I write "appears to be" because "The March for the Lost" is very flippant when it comes to basic exposition. I had to learn from a plot summary that Hee-soo is apparently supposed to be a famous comedienne. Hee-soo's career is never relevant to the movie's story except to the extent that I guess it explains why we never see her working. Also, it's probably an explanation for why Hee-soo is trying to marry into a family of rich right-wingers who hate Communists.

This apparent framing device is quickly abandoned so we can instead get flashbacks to Young Myeong-hee (played by Kim Chae-hee), who's studying painting at university in 1980. She meets Cheol-soo (played by Jeon Su-hyeon) who is a student activist leader agitating for democracy. We learn surprisingly little about this rather interesting character background. Myeong-hee and Cheol-soo spend more time generically courting each other than they do talking about why he was hiding from the police.

The main problems with "The March for the Lost" are just structural. There's no one main character. We just keep jumping around from Hee-soo in the present day to Myeong-hee in the present day to Myeong-hee in the past day to Cheol-soo in the past day and there's other even less obviously relevant characters who get put in full focus now and then. The connections between these people are also kept intentionally vague, presumably so that the ending to the flashback sequences comes off as a surprise.

But more than any plot twist a good movie needs well-developed characters to be engaging, and it's just too difficult to get any sense of who Hee-soo and Myeong-hee are as people. They barely even talk to each other. Sure, this is emblematic of their emotional distance. At the same time, their stories do not have any obvious parallels. This is very awkward for a film that's attempting to argue that the Gwangju Uprising was an important historical event never to be forgotten. "The March for the Lost" is very unusually abstract when it comes to discussing what the Gwangju Uprising was actually about.

Instead, Myeong-hee and Cheol-soo become passive victims of history. The effect is underwhelming. Consider the title, which is in reference to a famous elegy written about the Gwangju Uprising. I can't remember if the song ever actually appears in the movie, because everything is too rushed and hurried for any one plot point to resonate. Having attempted to do several different kinds of stories using the Gwangju Uprising as a backdrop, ultimately, writer/director Park Ki-bok fails to do any of them proper justice.

"[HanCinema's Film Review] "The March for the Lost""
by HanCinema is licensed under a Creative Commons Attribution-Share Alike 3.0 Unported License.