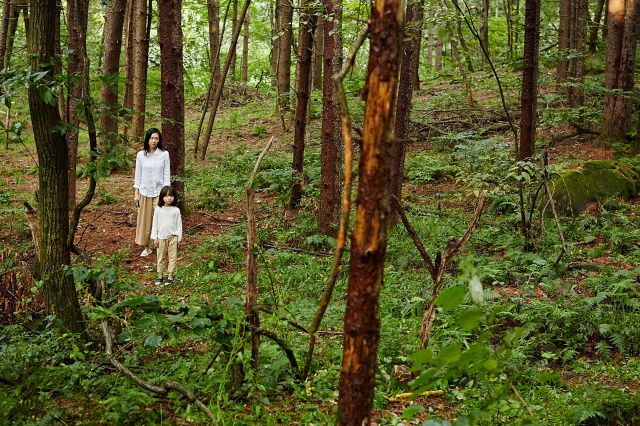 In the opening scene of "The Mimic", we see an obviously agitated couple driving to...somewhere. Once they arrive, hints of the supernatural imply the worst. The later appearance of their abandoned car outside of the place they were going appears to confirm said hints. It's from here that we meet Hee-yeon (played by Yum Jung-ah), a woman who moved with her family to the countryside for health, yet is still traumatized by the disappearance of her young son.

There is never a satisfying technical explanation for how the supernatural forces in "The Mimic" actually work. We know that there are horrific ear destroying sounds, increasingly blurry vision, and that mirrors are very bad news. We also know that the titular monster can imitate nearly any form of verbal communication, yet is so socially maladjusted that this mimickry frequently comes off as terrifying. But perhaps the worst part is that we never really see the monster directly do anything but frighten people, even when it has the opportunity to do much more horrible things.

Don't try looking for logical explanations to these issues, because that's very much missing the point. "The Mimic" is, from what we see of Hee-yeon's story at least, about the conscious desire to withdraw from the emotional pain of reality. Consider how Hee-yeon's husband Min-ho (played by Park Hyuk-kwon) is a constant moderating force, encouraging Hee-yeon to be sensible, and usually failing because as withdrawn as Hee-yeon feels, she truly does want to engage with people again.

Physically this is impractical living in the countryside. Emotionally it's impractical with the obviously suspicious and explicitly creepy situation with the huge hole in the middle of nowhere. But when the final shot shows us a distant future where the hole has been fully and irrevocably closed for good, what is the meaning of this? Are we supposed to feel happy that "The Mimic" cannot kill again? Or is this an metaphorical representation of the separation between the world of the living and the world of dead, and how they cannot coexist, and how when bridges appear beteween the two, they must inevitably be destroyed?

One powerful sequence late in the film comes to mind, in a foreboding staircase evocative of the Orpheus myth. Hee-yeon has to decide for herself whether to go to the living or the world of the dead. There is a logical, self-preserving answer to this question, and an emotionally satisfying one. The two are mutually exclusive. The choice Hee-yeon makes defines the narrative arc of the film, where in absence of evidence, she must choose what to believe.

That's the complex unknowable synopsis of "The Mimic" anyway. If you're looking for something more conventional, yeah, the movie is excellently made. It's the kind of horror that needs to be played with the sound all the way up and the lights all the way down, to heighten the sensory impact. The unnerving production design heightens the sense of anticipation that something horrible is about to happen. The real horror, though, comes from realizing that maybe, just maybe, the monster was in our own heart along.