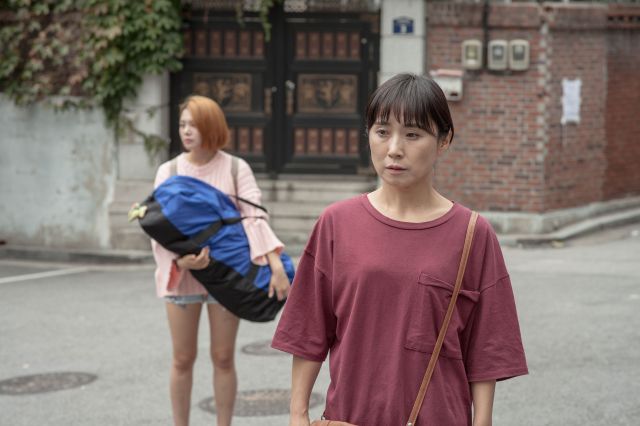 Ryeon-hee (played by Lee Sang-hee-IV) is an older middle-aged woman who works the miserable night shift at a convenience store. Ryeon-hee is very cold emotionally, and her behavior hints at an unhappy backstory. But then, we can tell right away that Ryeon-hee is a North Korean defector because her name is written according to North Korean spelling conventions- it would be rendered in South Korean spelling conventions as Yeon-hee.

Incidentally, Yeon-hee (played by Yoon Eun-ji) is a teenage runaway who takes to hanging around Ryeon-hee's workplace. While Yeon-hee is a very bright and cheerful young woman, she's also a bit of an idiot. In spite of being homeless and having the relevant survival skills necessary to pick up a free meal when necessary, Yeon-hee is shockingly na´ve. Ryeon-hee initially feels annoyance, then pity, then discomfort, and finally love for Yeon-hee.

Literally "The Namesake" is a story about the lonely life of a North Korean defector. It's accurate to this extent principally because the story eschews politics. Ryeon-hee's reasons for leaving North Korea were entirely pragmatic. Ryeon-hee already didn't have a life there anymore, but now that her reason for defecting is gone, Ryeon-hee doesn't have a life in South Korea either. The country is a very sad, disconnected, lonely place to Ryeon-hee, where people will pick fights with each other over the most petty and despicable reasons.

This is the context through which Ryeon-hee initially interprets Yeon-hee's existence. Yeon-hee is just one more pathetic, abandoned soul in South Korea, a country of apparently limitless wealth which is somehow incapable of providing for its most desperate citizens in need. Ryeon-hee watches on in disinterested helplessness at everything that happens, believing that this is simply the way life has to be for her as a citizen of this country.

Through sisterly romance Ryeon-hee starts to see her younger namesake as a person, and this inspires Ryeon-hee to try and make more of an effort. The reality of daily life is no easier, yet Ryeon-hee can genuinely go about it with a smile on her face, and an eye to show compassion to those who need it and to stand up for herself when necessary. It's easier for Ryeon-hee to visualize herself acting this way when all she has to think about is whether she would put up with someone being thatámean to Yeon-hee, or passively bullying Yeon-hee in such a way and realizing that no, this is not right.

"The Namesake" is very much a Christmas story, even if Christmas itself is never directly discussed. The movie takes a genuinely bleak situation and manages to mostly fix it with an attitude adjustment. Do Ryeon-hee and Yeon-hee have a stable life by the end? Well, not really, especially considering that Ryeon-hee had already been forced at one point to show Yeon-hee some serious tough love in order to make a very necessary point on the younger woman about boundaries. But the point is, they're trying. Whatever ambiguous result the future may hold, they have to at least try.