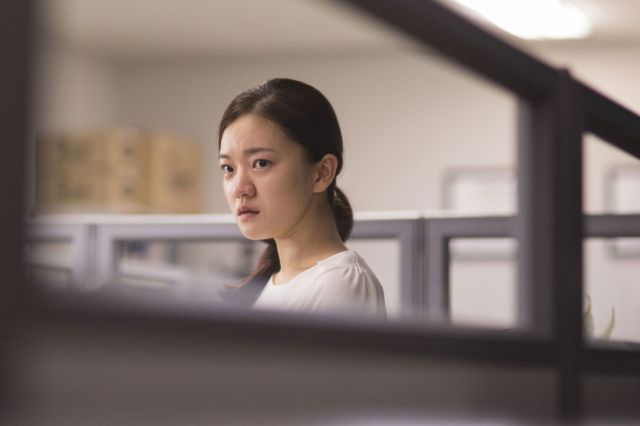 Byeong-gook (played by Bae Sung-woo) is a normal manager at a normal company who one day inexplicably comes home and does something rather awful. Detective Jong-hoon (played by Park Sung-woong) stakes out Byeong-gook's office in the hopes of sussing out a motive. Unfortunately, everyone is rather unhelpful in giving useful answers to his questions save for intern Mi-rye (played by Go Ah-sung), an intern who is not terribly popular with her co-workers for ill-defined social reasons.

"The Office" can best be described as a generic mystery thriller. This was not what I was expecting. Perhaps it was due to the involvement of famed director Hong Won-chan. Maybe it was the film's brief moment of fame at the Cannes Film Festival last year. Or maybe it was just that mystery thrillers tend not to take place at corporate offices. All of these in combination, really, led me to believe that there would be something remarkable about "The Office" and yet...nothing comes to mind.

The hopelessly generic nature of the corporation itself is a contributing factor to this. Given how it's obvious from the beginning that office work must have broken Byeong-gook's mind somehow, it would help if we had a better idea what his job even was. The supporting cast also never really rises above the level of just being petty and small-minded. This kills what little intrigue there is in the mystery, and their inevitable downfall comes off as rather perfunctory.

The best moments of terror come, oddly enough, not from any of the circumstances relating to Byeong-gook but rather Mi-rye's own internal angst over her genuinely awful job, where everyone seems to hate her but no one is willing to explain why. Ostracism, rather than death, is the greatest fear faced by Mi-rye. Observe how in flashback Mi-rye sees warning signs in Byeong-gook's behavior, yet chooses to do nothing since he's the closest thing to a friend she has.

Yet for this somewhat interesting thematic underpinning there's surprisingly little cause for the viewer to care what happens to any of the characters in "The Office". At one point Detective Jong-hoon himself is somewhat hilariously summoned away from the main plot because no one is all that bothered by how Byeong-gook appears to have escaped. If neither the cops, nor the corporations, nor Byeong-gook's prospective victims feel all that bothered by the ominous atmosphere present in "The Office", why should we?

The annoying part is that the premise certainly sounds like it has a lot of potential for social commentary. What better metaphor for capitalism run amuck than people so obsessed by financial statements they won't even bother to notice a tabloid story unfolding with themselves as the principal participants? Alas, "The Office" simply does not do very much with this potential, so the only real prospective audience for this film are those among you who love standard horror thrillers but have yet to see one that takes place in an office.