[HanCinema's Film Review] "The Poet and The Boy" 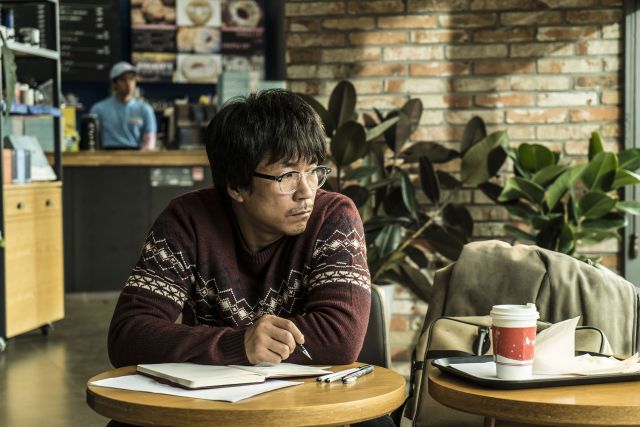 For the minor creative class of the bourgeoise, life can be tough. With excessive introspection comes an excessive desire on the part of a person to justify their own existence, when their life is so humdrum and ordinary there's barely even anything to gossip about. So it is with the Poet (played by Yang Ik-june) and the Wife (played by Jeon Hye-jin-II). They got married because they were getting old. They want to have a baby because they might not be able to soon. And the Wife wants the Poet to start seriously writing poetry so that they can feel special.

Or maybe it's just her. That's where the main conflict in "The Poet and The Boy" comes from anyway. It's about a marriage in existential crisis. The problem isn't that the Poet and the Wife are on the cusp of divorce. They seem satisfied enough with each other's company. It's that neither of them really have any idea what they want to do with life and are struggling to create something of significance. Lethargic as the Poet is, it's up to the Wife to motivate him.

That's where the Boy (played by Jung Ga-ram) appears- the teenager just sort of stumbles into the Poet's life by accident as an unintended side effect of one of the Wife's comical schemes to stimulate the Poet's artistic juices. The Poet soon becomes unduly fascinated by the Boy, because the Boy appears to live an interesting life. But the very factors that make the Boy appear desirable are also what's making him miserable.

This leads to the Poet's main ethical conflict. Is it more important for the Poet to pursue respectability, simply by analyzing the pathos of the Boy? Or would the more meaningful contribution be for the Poet to mentor the Boy directly, and provide proper guidance so that the Boy too, may ascend to a bourgeoise existence? No doubt the Boy would appreciate that state of mind more than the Poet, since the Boy knows what the alternatives are.

All of the characters in "The Poet and The Boy" are so heavily locked into their own perspectives it's hard to generalize any kind of universal statement out of the movie. Observe how the Poet once dreamed of escaping to Jeju in order to find calm and emptiness, and how now the Boy dreams of escaping Jeju, because he finds that calm and emptiness oppressive. The Wife, who has lived in Jeju her whole life, just finds the environment normal and is satisfied with modest ambitions.

There's no possible answer to these three wildly differing feelings of malaise that could possibly satisfy all three lead characters completely. So instead we have to hope for partial satisfaction. This is sort of achieved in the end- both for them, and for me. I think about "The Poet and The Boy" wondering if I, too, might be missing something important in life that I never really had a shot at getting in the first place. But then I, like the Poet, am a member of the minor creative class of the bourgeoisie.

"The Poet and The Boy" is directed by Kim Yang-hee and features Yang Ik-june, Jeon Hye-jin-II and Jung Ga-ram.

"[HanCinema's Film Review] "The Poet and The Boy""
by HanCinema is licensed under a Creative Commons Attribution-Share Alike 3.0 Unported License.