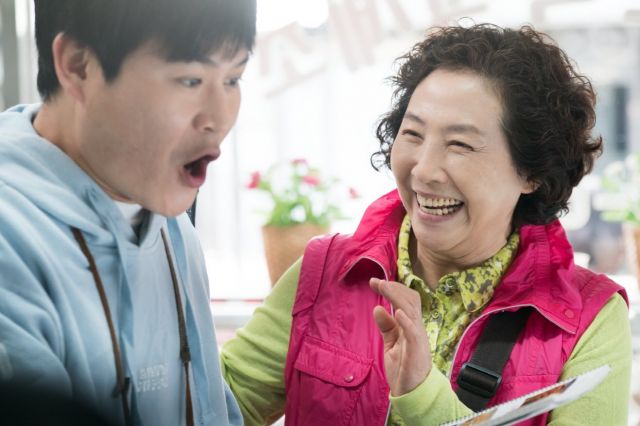 Can mentally challenged adults survive on their own? Elderly mother Ae-soon (played by Go Doo-shim), rather understandably, is skeptical of the prospect. She has had to take care of In-gyoo (played by Kim Sung-kyun) her whole life, and he never appears to have advanced beyond the mentality of a spoiled child. In "The Preparation" Ae-soon is forced, through the plot device of her own mortality, to confront the possibility that she's wrong. Really it's more of a hope, considering how awful the alternatives are.

For all that, the overall tone of "The Preparation" definitely skews to the lighter side. This a consequence of most of the action being from Ae-soon's point of view. Even In-gyoo's more selfish and destructive actions come off largely as childish charm. In an odd way, by always being around to hold In-gyoo in check, Ae-soon actually sort of enables some of In-gyoo's worst impulses. He always assumes that mom is going to fix everything somehow.

In that light it's actually more impressive that Ae-soon comes off as sympathetic than that In-gyoo does, since it's only her lack of faith in In-gyoo that has made the prospect of their inevitable separation seem so bleak. But much like In-gyoo, Ae-soon's only real crime is being ignorant. The real hero of the movie is Chief Park (played by Park Chul-min) who has the patience to maintain a good relationship with both Ae-soon and In-gyoo- and with it the open offer of assistance should Ae-soon change her mind.

I mean hero in the narrative sense, not the literal one. Chief Park actually has very little screen time, since he's merely the means by which Ae-soon and In-gyoo are able to go through radical character changes. They are the people we care about. We constantly root for In-gyoo to succeed in whatever minor challenge he's up against because limited mental faculties notwithstanding, In-gyoo is a legitimately good guy.

Ae-soon's character arc is likewise meaningful because the woman was devoted to her son in the very last moment, even as physical reality makes his devotion to her far more obvious. "The Preparation" is a story about mutual love. In-gyoo becomes a more useful person to society by learning how to live on his own. But he becomes a better person morally and ethical by gaining stronger comprehension of the notion of filial responsibility.

"The Preparation" is the kind movie that is inspiring by presenting models of what to aspire to. Ae-soon is a flawed woman who solves her main pressing existential crisis by having an open mind about preconceptions. Whereas with In-gyoo, the impression we're left with is, if the mentally challenged guy can so seriously give it his all for the sake of a mother's love, what excuse do the rest of us have? I guess if I really wanted to be a grump I could critique it "The Preparation" for its obvious idealism. But this is a movie that aims for the heart, and knows who its audience is. You can probably guess well enough whether that audience is you.