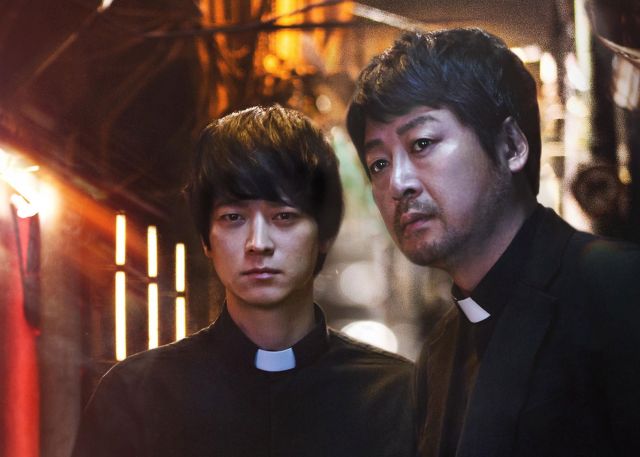 A demon is on the loose on Korea, and the situation dire enough that the Vatican ends up sending in two of their own exorcists when they are unable to make contact with the local Korean expert. Unfortunately that only ends up delaying the problem. After some brief consulting about whether or not demons are even real, and then more failures, the Korean Catholic command structure decides to send in Deacon Choi (played by Gang Dong-won), a divinity student who more-or-less meets the qualifications necessary to work as an exorcism assistant for Father Kim (played by Kim Yun-seok).

The first half of "The Priests" is just standard worldbuilding. Deacon Choi has no idea whether or not demons actually exist- he's just following orders for reasons that end up not being particularly important. If you want to nitpick plot, "The Priests" is loaded with dead-end story points that never end up going anywhere because once the exorcism starts to happen, well, all of a sudden everything that does not directly involve exorcism very quickly becomes much less important.

The funny part about "The Priests" is that, especially as presented through Father Kim's perspective, the exorcism just comes off as standard practice. Ominous early speeches about this being an especially dangerous and powerful demon don't really amount to much, mostly because by the time the Father Kim and Deacon Choi show up the demon is already fairly well restrained. It's the ritual that marks the real appeal of "The Priests", because it looks really freaky.

That, by far, is the best strength of "The Priests"- its powerful sense of imagery. I've never seen Catholic priests look this epic and cool before. Even when they're just hanging around having expository dialogue, those frocks give a real air of gravitas. We very much get the sense that religion isn't for weenies. Sure, today Deacon Choi is just trying to subtly goof off during class. But then the day comes when he must use his skills to fight evil.

Of course, the problem with all this is that "The Priests" is pretty much a complete indisputable blasphemy. Not that this has stopped anyone else from making exorcism films before, it's just that those movies don't generally get into complicated boring questions like how exorcists function in the hierarchal Church structure. All this exposition really does is slowly manage to convince the viewer that yes, demons could be real, and there's a decent amount of paperwork that's involved in the process of conducting an exorcism.

It's all very spooky, freaky, and not even necessarily original. What sells "The Priests" really is writer/director Jang Jae-hyeon's obvious passion for the project. There's no vain snarky pretensions about exorcisms and demons as being a metaphor for being anything except obvious evil. The script doesn't sidetrack itself into neat little attempts at social commentary. "The Priests" is about a couple of guys who prepare for an exorcism, then they commit an exorcism, end of story. Take it or leave it- but I suggest you take it.