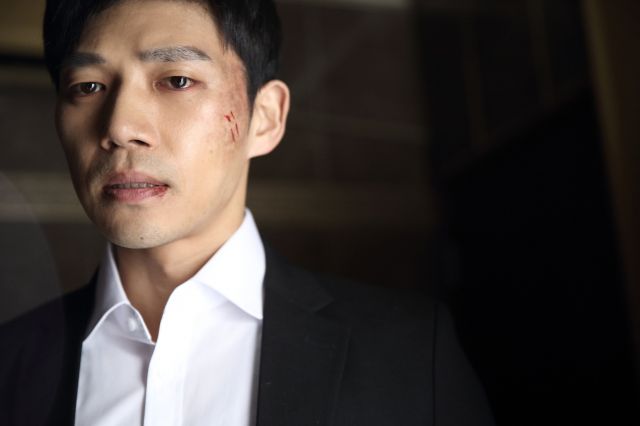 Do-joon (played by Ji Seung-hyun) is a respected, successful corporate type. He even wrote a book! Everyone wants to hang out with Do-joon, especially women. He has a good relationship with his staff. And yet there's something missing from Do-joon's life. His wife and daughter are gone, because Do-joon is paying for them to live overseas, so night after night, Do-joon is bored out of his mind, eating instant noodles and watching old family videos. Then, in short order, life for Do-joon suddenly becomes very violent. A clown suit is involved.

I actually liked the extended, generally boring set-up and exposition for "The Puzzle" more than I liked the traditional genre follow through. Most movies, when they want to do loneliness, they overdo it and make the target come off as a tragic figure. Do-joon, by contrast, is just bored to the point of annoyance. There's a great scene where Do-joon snaps at his wife because she cancels a family visit that he had obviously been looking forward to under the pretext of illness.

Do-joon's wife is an interesting character in general. She never appears directly, but through Do-joon's mind, we can see that she is very immature. There was once a time when Do-joon thought that was cute. But now? Do-joon struggles with fulfilling some very basic emotional needs and his wife barely seems to care. That Do-joon does not attempt to contact his wife during the movie's prolonged crisis is telling- he already knows she won't be any help.

But then, what would Do-joon tell her? Indeed, Do-joon appears to be entirely guilty of the crime he has been accused of. Or at least, Do-joon doesn't seem to care very much about what happens even to innocent bystanders, since his main obsession is finding whatever nebulous conspiracy set him up and dispensing revenge. And so, Do-joon proceeds to go on increasingly violent rampages, to the point that I wondered if we were even supposed to think he was the good guy.

If nothing else writer/director Lim Jin-seung understands his audience- bored men like Do-joon who are looking for some crude action to entertain them for an hour and a half. Any complexity in the story is just a bonus, since the important part is that plausible easily understood excuses are provided for more senseless violence. There's a video game like roteness to the narrative structure. Do-joon finds a bad guy, and punches him until he gets a clue that leads to the next bad guy in the next mission.

Do-joon's crude investigative technique is also reflected in the equally crude cinematography. While Do-joon is very proficient in Kendo (presumably the in-universe explanation for why he's so good at killing people), the fight scenes turn into huge bloody messes so quickly they feel more like thuggish street fights than they do anything with choreography. Not that there's anything wrong with that. I appreciate how transparent "The Puzzle" is. Even the gimmicky final plot twist is perfectly coherent which as far as I'm concerned, is more important than polish anyway.

"The Puzzle" is directed by Lim Jin-seung, and features Ji Seung-hyun, Lee Se-mi-I and Kang Ki-young.