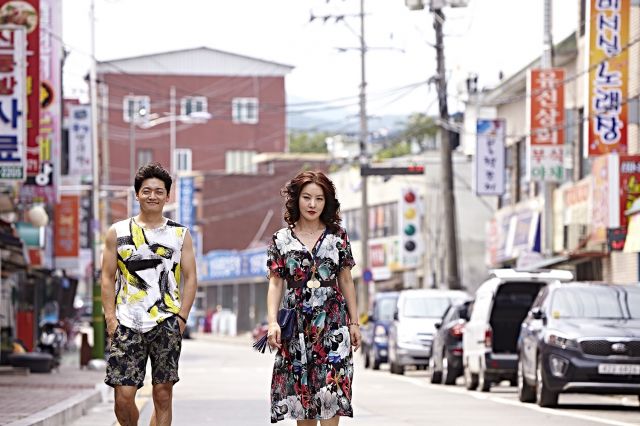 Mi-kyeong (played by Park Ji-young) is a meddling mother. She's able to mind her own business now that her son Ik-soo (played by Kim Dae-hyun-I) is safely away in Seoul studying for exams, but a strange incident at Mi-kyeong's own residence soon sends Mi-kyeong packing off to find out what Ik-soo is up to. No matter how much Ik-soo resists her presence, Mi-kyeong is unwilling to leave until she finds someone who can be brought up on criminal charges for something. She is "The Queen of Crime" after all.

Usually that phrase refers to a person who commits crime rather than one who solves it. But that's just one of the weirder implications in "The Queen of Crime"- where Ik-soo is perfectly happy to just mind his own business, Mi-kyeong actively goes around looking for trouble. And as it turns out, practically everywhere she digs it turns out there's someone in the whole ronin racket committing some sort of crime relevant to jobless hopeless young people living lives of fruitless study.

So far I've probably made "The Queen of Crime" sounds like some sort of extremely dark social commentary. It's really not. At worst "The Queen of Crime" is a black comedy. What I must continually emphasize, though, is that the only reason the story goes this direction is because Mi-kyeong stubbornly insists on pushing the plot in that direction no matter how little evidence there is to support her case.

In general Park Ji-young's performance as the aggressively maternal Mi-kyeong is the main highlight of "The Queen of Crime". It really is uncanny how, in spite of being fairly generally annoying, Mi-kyeong is able to win a lot of friends at Ik-soo's apartment complex simply by acting like she cares. And Mi-kyeong does care, it's just, she cares about her son really, and everyone else is just a proxy who's so used to being taking for granted or outright ignored that they enjoy the attention.

Note that none of the characters in the apartment complex actually know each other by name- just the numeric designations of the cheap rooms they inhabit. Mi-kyeong is so devoted to her mission of trying to find a criminal in Ik-soo's apartment complex that this weird ronin lifestyle is never really investigated in much detail, which allows for a fitting backdrop. We start to believe after awhile that Mi-kyeong is right- a place this awkwardly bizarre must have something explicitly wrong somewhere.

"The Queen of Crime" is endearingly weird. While always managing to stay in a fully realist mode, it is nonetheless a movie about a meddling mother trying to solve a possibly non-existent crime for the sake of her ungrateful adult son who would rather just take care of himself. I'm not sure whether the movie is trying to make a statement about mothers, mysteries, ronin culture or if these are all just accidental flourishes in a rather straightforward plot. The ending certainly seems to imply the latter explanation, although in any case, the flourishes alone are strong enough to make "The Queen of Crime" easy to recommend.

"[HanCinema's Film Review] "The Queen of Crime""
by HanCinema is licensed under a Creative Commons Attribution-Share Alike 3.0 Unported License.