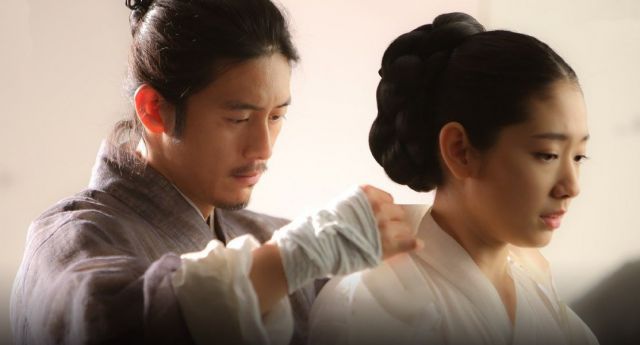 Dol-seok (played by Han Suk-kyu) makes fancy clothes for royalty, having risen up in the proper way, through official connections. Up-and-coming talent Gong-jin (played by Go Soo) is more crude, using clever advertising schemes to showcase the popularity of his product. Gong-jin gets his chance to break into the big leagues when the Queen (played by Park Shin-hye) has to look for support outside of official channels.

At its best, the film looks really, really pretty. There are loads of beautiful traditional Korean clothes on display here. What's even better is when "The Royal Tailor" actually gets into the topic of what makes some clothes look so excellent that all your rivals will be jealous. It's a pretty compelling argument for making sure to dress nice at job interviews. Clothes just don't make you look confident- they make you feel confident by just being so gosh darn comfortable.

Then there's the story, which makes less sense the more I think about it. A royal intrigue where the weapon is fashion design is certainly a pretty strong plot hook with lots of potential. The problem is that the rules of this conflict are rather poorly defined, except when matters get somewhat incestuous. Gong-jin and the Queen conspire to get back at an uppity concubine by...well, look, I understand that the montage in question is supposed to be funny, but that doesn't change the fact that director Lee Wonsuk appears to literally be conflating fashion with whoredom.

The final act in particular takes a rather dark, confusing, and pointless turn. Technically I don't see how anyone has actually committed a crime. Sure, royalty can do whatever it wants. In narrative terms, though, it's pretty unsatisfying for a film to straight up say that nothing which has happened really mattered since apparently jockeying for position in certain specific ways warrants a death sentence. Just a scene establishing or even implying there were actual dangers would have done a lot to effectively build up the conflict.

Even this rather sudden shift at the end would be reasonable if any of the characters were worth caring about. But they're really not. A cameo appearance by Lee Do-yeon is the closest "The Royal Tailor" ever gets to eliciting real sympathy. And this is mostly because Lee Do-yeon is playing the same character role she always plays. Consequently, I knew exactly what she wanted, how she could succeed, and how she could fail. By contrast, the other main characters lack any such clear definition of motive.

For what it's worth "The Royal Tailor" is obviously more concerned with visual feel than with narrative coherence. Unfortunately as far as screentime goes there's not quite as much emphasis on the fashion and comedy as there is on the rather grim plot. For this reason "The Royal Tailor" fails to reach the cult sensibility of "Fashion King - Movie", which used similar tropes to similar effect. Really this is just a movie that tries to do too much. It already has Park Shin-hye wearing all manner of beautiful hanbok. That's the main hook. From that point there's really no need to make things so complicated.