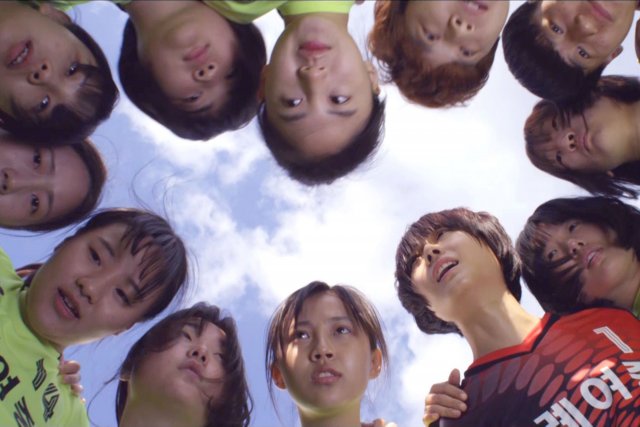 In rural Wanju, a middle school girls' soccer team aims for South Korea's National Soccer Championship. Their coach Soo-cheol (played by Jung Woong-in) is an alcoholic who formerly managed a far more high prestige team. But he's a good coach because he...um...makes the girls on the team run a lot. I'm not exaggerating, when Soo-cheol is pushed into resigning following an embarrassing performance, some girls try to speak up for him but most of them can't actually think of any reason why they should.

Eventually this plot point is resolved, not by asserting the value of Soo-cheol, but by the new coach being shown to be much worse. I noted, with some confusion, that the new coach was at least interested in discussing actual soccer strategy, which is something that Soo-cheol never did. All the same he's a jerk so Soo-cheol predictably comes back and solves the team's performance problems with training montages. Again, no exaggeration, the team just gets better without any real explanation.

"The Shooting Girls" is a movie that clearly wants to be an inspiring story about a girls' soccer team that sadly just doesn't have the slightest clue how to go about this fairly modest goal. It's obvious, for example, that writer/director Bae Hyo-min knows absolutely nothing about soccer as a game. He knows a lot of sports movie clichés and does his best to jam as many of them into the story as possible. This is actually considerably more obnoxious than it sounds because "The Shooting Girls" does have some interesting ideas which are totally underdeveloped.

Take the bootleg soccer shoes we see some team members acquire early on. This extremely adorable and distinctive introductory scene contrasts the dualing interest girl soccer players have in both functional gear and cute boys. There's also an intriguing follow-up where the shoes are stolen to be used as barter fodder by a man who's not quite so drunk and stupid as he looks. This then segues into one of the girls on the team guilelessly acquiring the shoes, completely unaware of their convoluted origin story.

This whole sequence has lots of great dark, subversive elements about the movie's unique Wanju backdrop. But instead of building on this excellent use of tone writer/director Bae Hyo-rim very frustratingly just turns this whole subplot into pointless overwrought drama. The whole arc is also the first to bring up the plot point of the girls trying to solve problems by polluting the river, a very bizarre and problematic recurring theme.

Of course what makes this theme especially annoying is that it's the closest thing the movie has to a consistent moral arc. But never mind the overall messaging. "The Shooting Girls" is a bad movie mainly because it's incredibly boring and predictable, only ever managing to be distinctive largely by accident. There's barely even any soccer scenes, and the final tournament is blazed through so quickly it feels more like a montage than a proper climax.