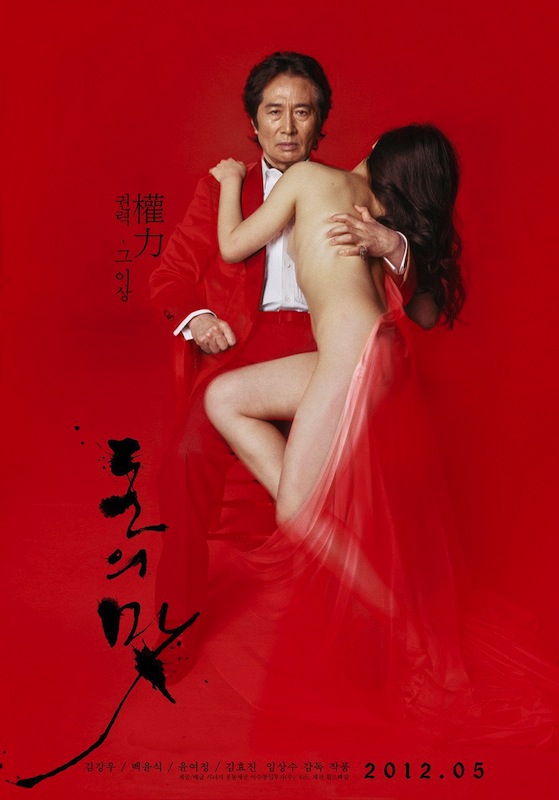 Im Sang-soo came back from the 2012 Cannes Film Festival bitter and dispirited as "The Taste of Money" received the lowest average rating from their panel of internal critics. This, Lim's fifth film, also struggled at the Korean box office with a mere 1,162,699 admissions as this 'spirited' sequel to his 2010 remake "The Housemaid - 2010" failed to perform both local and abroad. Last year the Korean box office was smothered with sexy thrillers and dramas, some more successful than others, leaving many cinephiles and critics to question the significance and scope of such provocative films.

Lim's 2010 remake of "The Housemaid" was also met with scepticism and received a lot of public attention due to its uninhibited portrayal of the salacious and disturbing world of Korea's wealthy elite. Those who caught Lim's modern interpretation of Kim Ki-young's 1960s classic will instantly recognise the film's grand and opulent veneer as the fantastically rich play with power, money, sex, and, of course, fire..

"The Taste of Money" bursts out the gates with a powerful opening scene that intelligently captures the dilemma facing Yong-jak (Kim Kang-woo), the highly educated assistant to the CEO (President Yoon played by Baek Yoon-sik) of Korea's richest and most powerful family. Yong-jak and Yoon are standing in a room stacked with an unfathomable wealth of neatly arranged cash. After packing two large suitcases intended for a massive bride to hide the companies shady money-management, Yoon turns to Yong-jak and encourages him to take some for himself. Yong-jak contemplates the enticing gesture, but ultimately refuses and, instead of having a 'taste' of the cash, he refuses and continues admirably with his duties as he settles for just a whiff. This initial test of character is then put into serious question over the course of the film, as Yong-jak unavoidable gets swept-up in the family's high-stakes power games; all the while stretching his own moral footing as he slips and slides deeper into their dangerous and all-consuming world of this disfuntional family.

Unlike Lim's 2010 film, here we come to identify with a male 'housemaid' and his manipulation and personal fortitude in the face of such overwhelming pressure and cruelty. "The Taste of Money" also probes/challenges Korea's male-dominated society by symbolically empowering a number of the woman, specifically the roles of Yoon's wife Baek Geum-ok (Youn Yuh-jung) and his daughter Nami (Kim Hyo-jin). Both of which yield a palpable power over the men in there lives, resulting in a number of sex scandals that further fuel the fire that is slowly consuming their family and, more important to some members, putting their family honour and well-being at serious risk.

In response to the film's failure overseas, Lim stated that "Only ordinary people living in Korea can understand [his film]" and even reportedly vented his anger by promising that his next film will be a harsh critique of Caucasians. Flammable words indeed, but for a film that can, according to the director himself, can only be appreciated by Koreans, the film contained a rather large percentage of English as well as the sensitive issue of inter-Asian relationships and the perceived power one party holds over the other.

Darcy Paquet, a Korean film journalist and critic living Seoul, led the English charge through his character Richard, a dubious businessman who brokers a crucial deal with the family that would have serious consciences for them and their silver spoon collection. A number of English lines are always spoken by a few of the Korean actors and actresses. Unfortunately, while the quality of the English avoided much suspicion, the lines themselves fell flat and were too drenched in 'pop-English' ("Oh my God", for example was tactlessly and inappropriately abused) took the edge off the film's attempt of trying to speak to/ reach to a larger community than the one Lim seemingly so adamantly believes his film is aimed at.

In addition to the large quantity of English, the film also pushes hard at the extra-marital affair of Yoon with a Filipino housemaid named EV (Maui Taylor), with whom he has two children with. Again, to say that the film is only best understood by Korean's living in Korea seems contradictory to the film's actual content and themes. There is a strong predujice that sometimes exists in Korea towards a number their fellow Asians, and to have chosen to include such a controversial facet and then proclaimed the film's intended audience is either extremely arrogant or ignorant.

Having really enjoyed Im Sang-soo's "The Housemaid - 2010" I was highly disappointed with his efforts here. It would appear that the film slipped away from the intelligent and slick impression found in it's opening moments. The film quickly dribbled out of the rigid mould Lim had planned for the film, leaving it stretched and scarred and, quite obviously, unattractive to foreign audiences. Ironic the was Lim's comments post-Cannes as he claims an elitist viewing of the film is necessary for its understanding. It's a damagingly and naïve reaction to the film's failure that was placed on the world stage and should have represented Korea better. "The Housemaid - 2010" was much more 'internal', and confined itself within the the actual household; here though Lim has tripped himself up by attempting to suggest a larger, more transnational world, but at the same showed an unwillingness to give those areas the socio-political consideration required to round his fifth feature.