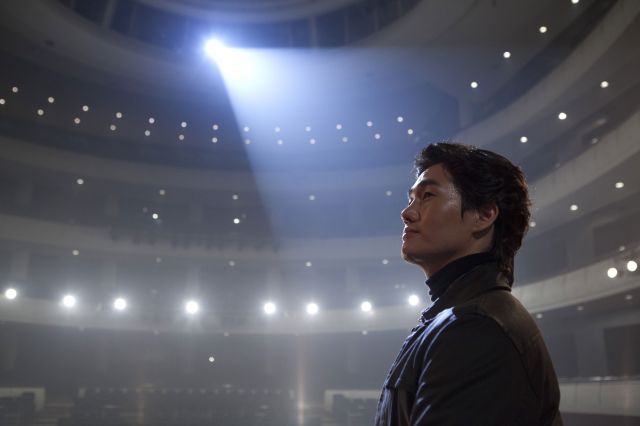 Jae-cheol (played by Yoo Ji-tae) is a famed Korean opera singer. Jae-cheol's story is mainly one of novelty. As noted by music producer Sawada (played by Yusuke Iseya), he didn't come all the way to Europe just to hire some Asian guy. But there's no arguing with the quality of Jae-cheol's voice".The Tenor Lirico Spinto" is, in full force, a love letter to opera. All of its characters genuinely adore the institution, and with these kinds of musical performances, it's easy to see how the art form is able to inspire such loyalty.

Those of you who don't care about opera may be less than impressed. Weirdly enough "The Tenor Lirico Spinto" actually managed to remind me a bit of "GROW: Infinite's Real Youth Life" from earlier this year. Either you're going to understand very quickly what music the characters in this movie are referencing, or you're not. There's really not much middle ground. The few attempts made at explanation are cursory, and only work when the media discussed has crossed over with more well-known fiction. The thematic relevance concerning Othello, for example, is pretty obvious.

Yes, as with most biopics of this sort, there's a tragic plot development- one clichéd enough that my first instinct as a critic is to attack the obvious triteness underscoring the film's emotional resonance. The only trouble with this negative angle is that "The Tenor Lirico Spinto" is mostly, and as far as I can tell accurately, based on a true story. One that's only particularly well-known in the opera world, so I'd just as soon not spoil it, predictable as the plot trajectory ends up being.

Predictable or not, this makes for a fairly hurtful reminder that in real life, elaborate narrative structure isn't everything. Sometimes it really is just a matter of friendship conquering all and never giving up on your dreams. Even if the relationship between Jae-cheol and Sawada doesn't seem to have much depth, look, these guys are united in their sheer love of music. What other excuse do they need?

Certainly the opera alone gives "The Tenor Lirico Spinto" enough reason to exist. The soundtrack is excellent, and Jae-cheol's voice is so well developed in the first portion that it genuinely is sad when we can't listen to it anymore and have to go in to more typically melodramatic territory. As Sawada himself says- music is what gives life meaning, even if life overall just seems to be really awful and horribly unfair.

But note also the way music is presented as a strong unifying thread. Jae-cheol and Sawada can only directly communicate with each other in English, and the melodies which bring them together are presented in even more exotic European languages. Sawada can't even read sheet music, and opera production in general is portrayed in a generally cynical light. Again, though, the question is just, so what?

"The Tenor Lirico Spinto" is a tale that can be appreciated by any fan of music that's in the hobby primarily for the emotional feelings it can inspire. While the story's a bit too standard to really match the obvious art in the opera it showcases, it's the appreciation that matters rather than the complexity. That's a pretty good message to end a film on, even if it's lacking in more sophisticated depth.