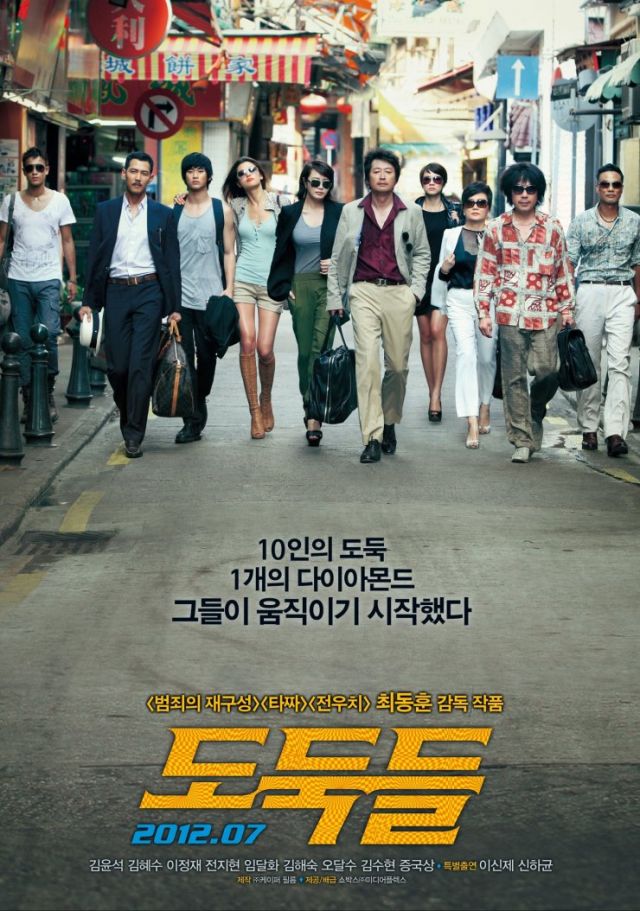 Choi Dong-hoon's colossal hit "The Thieves" laid siege to the Korean box office last July, snatching 2 million admissions in the first weekend of its nine-week presence in the top ten. This record-smashing flick earned almost 13 million admissions during that time and its profitability will surely continue as the film is set to open in China on the 15th of this month on over 3,000 screens. Its rise to fame was relentless and it was honoured by the film industry as it was nominated for its excellence across most categories from Korea's top award ceremonies.

"The Thieves", much to the distress of perhaps a few of its paying audience members, has been likened to Steven Soderbergh's 2001 film "Ocean's Eleven", but the film deviates enough from the ' heist ' formula to ward off most critics knee-jerk comparison. It's definitely one to hunt down or watch when you can but have we all been guilty of the Halo effect?

After receiving some heat off the back of their last heist, an elite team of thieves regroup overseas and make plans to acquire a rare (and, of course, unbelievably expensive) diamond necklace. The group's leader, the slick Macao Park (played by Kim Yun-seok), may not have the swagger of Brad Pitt or the sophistication of George Clooney, but he does manage to bring his own brand of excellence as he heads this diverse group of professional criminals. Unfortunately for Park's team, little and less goes according to plan, leaving the team fractured and reeling from the hiccups that arise during the heist.

The prospect of a Korean heist film seems problematic as most heist films take place (or at least contain) a casino. Gambling is illegal in Korea but Choi solves this little glitch by setting the film in the city of Macau and in Hong Kong. Hence the film contains an international flare that is backuped up by some inter-continental casting choices in the form of Angelica Lee, Simon Yam and Derek Tsang. There are also plenty of top Korean actors and actresses that will keep local fans hooked. Kim Hye-soo and Kim Soo-hyun were particularly impressive and arguably led this eclectic mix of talent to box office glory.

Still, some may be frustrated by how the film handled the romances within the group, as any really inklings of love (or lust) seemed to be lazily inserted/accented by many a stolen (forced in one case) kiss and a schoolyard sense of sexuality that would struggle to wobble even the weakest of knees. "The Thieves" also proved to be a mixed bag in terms of its technical presentation. Despite being nominated for (and winning in a few instances) awards for technical achievement, the film failed to be consistent with its brilliance. Its action sequences (particularly those found in its latter half) really showed the production crews' talents; while other scenes where haphazardly captured as Choi seems uninterested in maintaining stage positions and cinematic consistency (the "180-rule", for one thing, was snuffed in a few cases). The result is a number of rather awkward moments that force you to constantly re-establish the actor's position/movements within the frame, dispelling the magic and drawing our attention away from the moment, and ultimately damaging the overall quality of the production.

Another element that was blaringly oblivious (as well as rather ethically flammable) was the film's obsession with smoking. Cigars and cigarettes smoked-up the screen as if there was some 1950s quota they were getting pressure to meet. Of course when included for the right reasons, such a feature would no doubt be acceptable. However I found it quite ridiculous and tacky, and when paired with Choi's other little obsession, dark sunglasses, the film's attempt at being classy slipped quietly away.

Indeed, "The Thieves" has set a new standard of success within the Korean film industry as it continues to reap the rewards of what is, overall, a highly entertaining and exciting film (albeit with a seemingly unavoidable Korean fluffiness). The film's story is not, sadly, its strongest point but some great acting and a few choice scenes and sequences will make you soon forget many of its technical imperfections. Watch "The Thieves" for your favourite actors and actresses and for the pure spectacle of Choi's smoky, and apparently very bright, world of high stakes thievery.

Available to preorder on Blu-ray from YESASIA