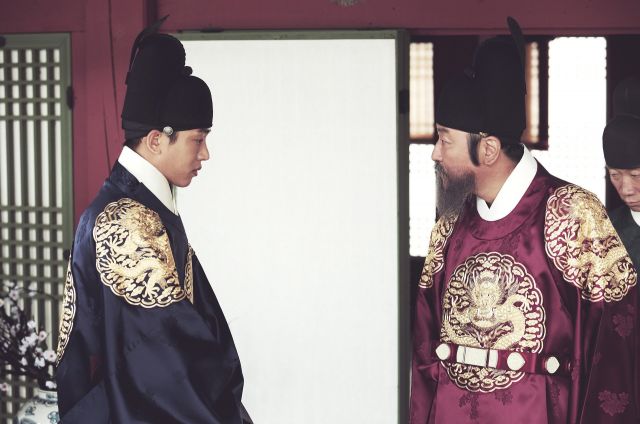 Prince Sado (played by Yoo Ah-in) appeared, at a young age, to have all the proper talents necessary to become an effective ruler of Joseon Korea. But as Prince Sado grew older, it became clear that he was a sensitive child poorly suited to statecraft though well attuned to art. King Yeongjo (played by Song Kang-ho) was disappointed. Though King Yeongjo was a great King, he lacked the patience for anything except perfection. And unfortunately, the glaringly imperfect Sado was King Yeongjo's only surviving son.

"The Throne" is a royal intrigue in the tradition of Damocles. King Yeongjo has long grown accustomed to the sword above the throne which marks his destiny. Prince Sado, by contrast, can't accept this fate. He just doesn't have the right temperament. When Sado loses his only real ally in the palace, he becomes obsessed with obscure rituals, and soon does little in his spare time save for slowly spiraling into madness. Sado is no Prince- he's just a sad little boy made increasingly distraught over the fact that nothing he does will ever be good enough to please his father.

And that's about all there is to "The Throne". Aside from this one main, obvious thematic flourish, nothing else happens in this film that's of much relevance. Nearly every other character is just a terrified bystander first to King Yeongjo's immensely regal demeanor, and later to Prince Sado, who has clearly lost his mind and has no way of getting it back. The entire situation is, in a word, completely and utterly hopeless. Director Lee Joo-ik wallows in this sentiment, maximizing the sense of helpless defeat. It's for good reason that we start with the box and work backwards through flashbacks.

"The Throne" is immensely cinematic in its portrayal. There's not really any deeper meaning to be had here- the story that plays out is a matter of scale. Hapless father-son relationships are always unpleasant, but the unfortunate case of Prince Sado is one that's tragic mainly because of its scale. Most sons don't resort to outright murder to vent out their filial frustration, but in Prince Sado's case there's no one who can stop him. The main reason Sado can't get along with his dad is precisely because Yeongjo won't talk to him.

I especially liked Yoo Ah-in as the defeated Prince. A late scene has Sado eavesdrop on an essential conversation that destroys the Prince precisely because it's everything that he ever wanted from his father. It's just that Sado is unworthy of the dignity because he likes different things. Sado loves the beauty of nature, the spirituality of ritual, the expression of art- and these things mean nothing to King Yeongjo.

It's appropriate that the visuals of "The Throne" are presented in a similarly grandiloquent manner. Where King Yeongjo can only see the importance of the classics, Prince Sado (and director Lee Joon-ik) see a grand world of immense beauty just waiting to be looked at it- if only there was someone to watch it with together. "The Throne" suffers somewhat from it's extremely limited vision of the emotions at play the Prince Sado tragedy. But what the film chooses to focus on, it illuminates very well.