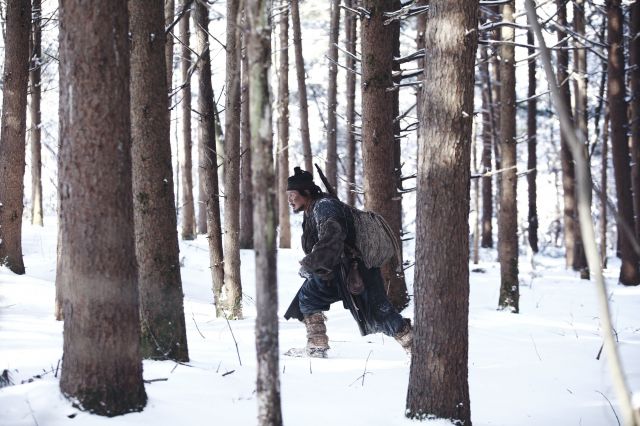 The year is 1925, the place Jiri Mountain, in the deep Southern part of Korea. The Japanese are pushing through on their plan to eradicate tigers and all other wild carnivores from the Korean countryside. Why? Well, officially because tigers are dangerous. Unofficially, the Japanese seek to defeat the tigers to prove once and for all that their new modern ways are superior to the old traditional ones. In this way "The Tiger: An Old Hunter's Tale" proves itself as backstory to the age-old question- why doesn't South Korea have any wild animals?

As film, though, "The Tiger: An Old Hunter's Tale" is most easily comparable to classic Hollywood monster movies. No, really. The CGI tiger is a creature of pure beauty- cinema spectacle at its finest, plausibility be darned. It kills who it wants, when it wants. But here's the thing. The tiger doesn't really want to kill at all, save for the bare minimum necessary to provide for its family. When the Japanese declare a War on Tigers, they defy the natural order of mutual respect.

That's where Man-deok (played by Choi Min-sik) comes in to the story and refuses to participate. His one-time apprentices, led by the grisly Goo-gyeong (played by Jung Man-sik) are perfectly willing to work as bounty hunters for the Japanese mission. But as we see, Goo-gyeong has essentially sold his soul for the sake of easy cash flow. A decent man at heart, Goo-gyeong lets his Desire To Kill tigers get in the way of basic humanity.

...Odd choice of words, I have to admit, given that the tiger, for all its rampages has, well, a certain kind of dignity that's absent from nearly every other character save for Man-deok. This is an essential parallel. Though depressed by the Japanese Occupation, Man-deok is able to maintain some joy in life through his son Seok-i (played by Sung Yoo-bin), and is willing to live life with that meaning alone. Compare the Japanese. What do you suppose is going to happen, when they run out of tigers to hunt? Will they be satisfied then- or slake their bloodlust on even more dangerous game?

Understanding "The Tiger: An Old Hunter's Tale" requires a strong appreciation of historical context. While it's easy enough to posit the tiger as being symbolic of Korea writ-large, what the tiger more broadly represents is the unknown, the dangerous, and the untamable. To modern scientific man, the notion of anything that exists beyond his control is offensive. The Japanese would sooner destroy the mountain than admit that there is more to heaven and earth than is dreamt of in their philosophy.

This is the nilhistic nightmare by which the film's final sequence should be interpreted. Man-deok and the tiger, alone with nothing else to live for. Now we die together, left in the bliss of dreams, a bygone fantasy of the simple humble life we wanted to live before big men with grand plans took it upon themselves to save the world. "The Tiger: An Old Hunter's Tale" is pretty harrowing stuff- absolutely essential viewing for any who find themselves looking back on the past, asking why. Why indeed.

"The Tiger: An Old Hunter's Tale" is directed by Park Hoon-jung and features Choi Min-sik, Jung Man-sik and Kim Sang-ho.