[HanCinema's Film Review] "The Tooth and the Nail" 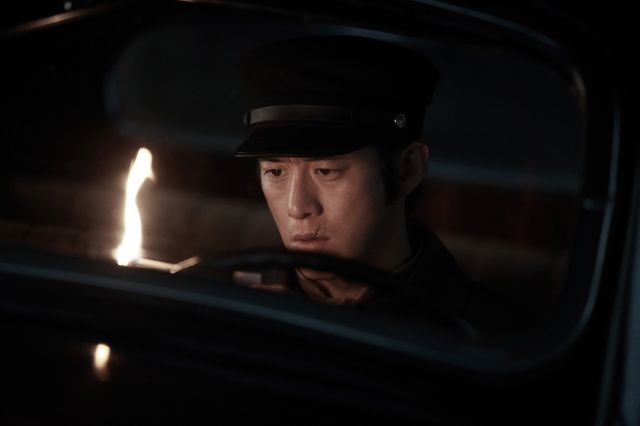 Tae-seok (played by Park Sung-woong) is a prosecutor working in South Korea in the late nineteen-forties. He is prosecuting a case where someone killed someone at the Seokjo Estate. "The Tooth and the Nail" gets off on the wrong foot almost immediately with possibly the most unnecessary framing device I've ever seen. Why not just start the story off chronologically, with traveling magician Seok-jin (played by Go Soo) getting sucked into an elaborate conspiracy with classy international man Do-jin (played by Kim Joo-hyuk) at the center?

The only explanation I can come up with is that the original book, by author Bill S. Ballinger, used a similar framing device. Although even that seems unlikely, since as far as I can tell neither a tooth nor a nail features prominently in this adaptation. Really, the main cause of consternation at the trial is how the only physical evidence of a murder even happening at all is a severed thumb. But believe me, as gory as that sentence probably sounds, "The Tooth and the Nail" is actually quite subdued in its methodological sequence of events.

...Which still confuses me to no end, because the events we see are flashbacks entirely from Seok-jin's perspective, when Seok-jin may or may not be dead, owing to the intentionally vague framing device. So the information we're getting is completely different from the information the characters in the courtroom are getting, up to and including the ending. That's a whole lot of special covering for a fairly basic revenge story disguised as a murder mystery.

Seok-jin's motivation is actually quite simple. It all ties in to Ha-yeon (played by Im Hwa-young), a woman Seok-jin meets by chance on the streets in Seoul. Their relationship is the emotional bedrock of the entire story- yet their chemistry is very frustratingly reduced to a moderately long romantic montage. Then there's the abrupt and surprisingly unambiguous conclusion, considering we don't even know the basics of what's going on at the trial until the very end.

But the sad part is, I can see what director Jeong Sik was going for here. He probably read "The Tooth and the Nail", really got into early post-war aesthetic, and decided to make a movie around it. Unfortunately, as a Korean person, Jeong Sik most likely interpreted the book's convoluted narrative structure as being a natural consequence of its foreign origins. In reality, most native English speakers aren't that interested in this kind of genre mystery, for the same critical reasons outlined in this review.

Ironically "The Tooth and the Nail" may have hope internationally because foreign audiences could inaccurately see the movie's flaws as quintessentially Korean. The film is very visually reminiscent of "The Handmaiden", has a similarly complicated plot, and also drew its inspiration from offbeat English literature. And really, "The Tooth and the Nail" does have enough going for it on objective merits that absent the framing device, I probably could have liked it in the same pulpy vein I enjoyed "The Handmaiden". But grrr, that framing device! It is bad!

"The Tooth and the Nail" is directed by Jeong Sik and Kim Hwi and features Go Soo, Kim Joo-hyuk, Moon Sung-geun, Park Sung-woong and Im Hwa-young.

"[HanCinema's Film Review] "The Tooth and the Nail""
by HanCinema is licensed under a Creative Commons Attribution-Share Alike 3.0 Unported License.