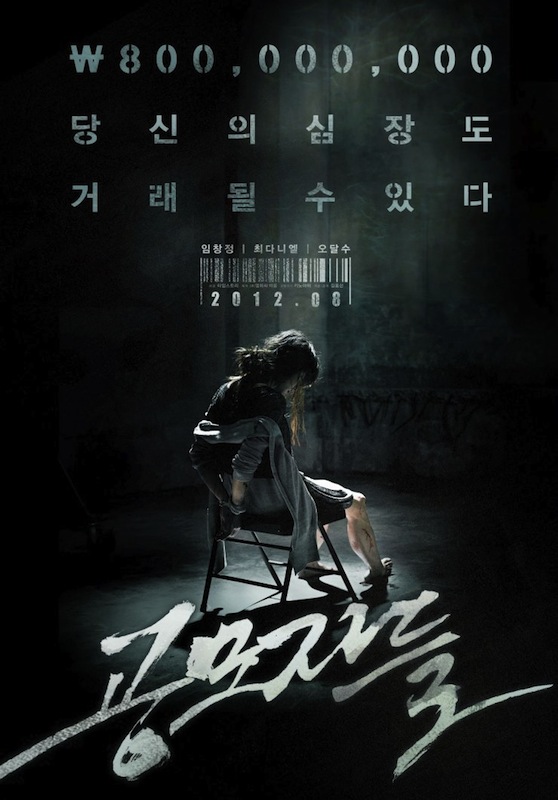 This epic thriller earned Kim Hong-seon the title of "Best New Director" at the 33rd Blue Dragon Film Awards late last year. Despite the honour, the film only managed a little over 1.6 million admissions during its 2012 summer release, as by its third week interest had already waned. Kin Hong-seon has long been involved within Korea's drama industry, directing a number series that includes "90 Days, Time to Love" from 2006 as well as, more recently, "Hero - Drama - 2012". This, his first step into feature length entertainment, is a thrilling and exhausting fall. Kim refuses to slow down at any point during this rampant and rich showing of the disturbing underworld of organ and body trafficking.

"The Traffickers" sets itself up well and viewers will find it hard, at least initially, to fully commit to any one empathy lights cast by the characters. However, as the title suggests, this is film largely concerned with the inner-workings and unsettling personalities involved within the organ trade ring. Leading this criminal group is the twitchy and pensive Yeong-gyoo (Im Chang-jung) who, after his last operation was raided and sunk, finds a lucrative new proposal to put things right. He and his crew are to travel on a cruise liner to China where, on route, they are to harvest organs from a young paraplegic woman (Jung Ji-yoon) for urgent delivery to a client in Weichai, China. It's a risky and flamboyant move that helps confine the action to the claustrophobic confines of the ship itself.

Yeong-gyoo's crew is made up of a few lively individuals, none more fascinating the sexual-sadistic surgeon Kyeong-jae. Oh Dal-soo's brings the sick and warped idiosyncrasies of this butcher to life and was perhaps the best performance on show in the film. In addition to Dal-soo's excellent efforts, Jo-Dal-hwan's character Joon-sik was too a pleasure as was Choi Daniel's shifty character Sang-ho (the wife of Jung Ji-yoon's character Chae-hee).

"The Traffickers" hits hard with adrenaline and testosterone, leaving not much room for a respectable female role, of which there were two attempts. Jo Yoon-hee's plays the naïve and mawkish young woman Yoo-ri who is on that same boat trying to get her father across for his much-needed surgery. Wide eyed and opened mouthed; Yoo-ri drifts through the film's length without ever really being there. Perhaps having it far worse was the fate of Jung Ji-yoon who was only require to be pleasant and innocent, a real victim that pulls at the audiences sympathies towards her as a powerless pawn in this overcrowded game of body parts and power.

"The Traffickers" plays heavily on the notion of power and money, two themes that are not uncommon in modern Korean cinema. Throughout the film these two notions are woven into ever interaction as the film draws deep to make its bleak and blackened message heard. A small motif running through the film seemed to be the handing over of large quantities of cash, each time in a different container. Thousands of dollars where passed around in boxes, pouches, shopping bags, KB Bank bags, and handbags, further cementing the film's cause and need to showcase the driving factors behind most of the characters' actions and behaviours. Indeed, whether innocent, corrupt or crooked, those in Kim's dark world are all driven mad by money and what it can bring to or put on the table.

As complications arise for Yeong-gyoo and his team the pressure starts to ramp up, soon the viewer is peppered with scene after scene of exceptional action, plenty of bloodshed, and a message that is morally obtuse, yet destructively satisfying given the film's garish and dank tone. However, before Kim is able to plant this bittersweet kiss of closure, viewers will have to deal with countless twists and turns as the narrative jumps and jives all the way to the very last frame. This is a film that takes its twists very seriously and it might well be the film's biggest flaw. The film's final act is heavily elongated, and the film's dénouement too cynical to allow the audience to get behind it all.

"Rudderless" is what came to mind half-way through as I found myself isolated behind the camera with no one to align myself with. But as each 'final' twist unfolded I was only able to sigh for but a brief moment, as what followed next was often not only thrilling but meticulous captured, with spellbinding results, by the film's cinematography Yoon Nam-ja. Overall though, it was if Kim was flushed with all the juicy possibilities his tale could take, but was rather unfortunately not able to pull the film's many threads to a sharp enough point.