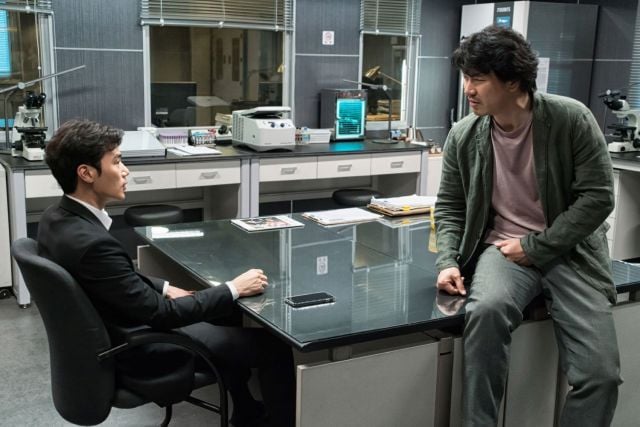 The first character we see in "The Vanished" is a security guard at the morgue. He's only vaguely paying attention to the closed circuit television when a sudden blackout turns everything just a little spooky. By the time the police arrive discrete facts are at a minimum. The corpse of recently departed rich corporate bigshot Seol-hee (played by Kim Hee-ae) has mysteriously disappeared. Also her husband professor Jin-han (played by Kim Kang-woo) was applying fake tears at the memorial service.

"The Vanished" starts out with some fairly obvious conclusions. We know that Jin-han is a total sneak. We're all but explicitly told that Jin-han attempted to murder Seol-hee so he could go run off with one of his students. When vaguely sympathetic motives for Jin-han are unearthed in flashback they prove completely unconvincing. Because really, if the guy wants to ditch his wife, why can't he just get a divorce like a normal person? What's he scared of?

The implication, naturally, is that there was some preexisting nefarious factor at play in that relationship driving the otherwise nebbish Jin-han into cold-blooded murder. While director Lee Chang-hee provides us with the trappings of horror and thriller genre films, ultimately the movie is essentially a mystery where we are left to ponder alternate hypotheses as to how and why Seol-hee's body was removed from the morgue under fairly realistic constraints. Very little of what we see is physically impossible to the point of requiring divine intervention.

Unfortunately the surprise factor was somewhat lost on me, because by sheer dumb coincidence I had already seen the original Spanish movie, The Body, on which "The Vanished" is based. Once I realized the movies were connected I was able to mostly reconstruct who organized Jin-han's torture and why, give or take a few plot points I had forgotten about. And that's really what The Body is about- the torture of the Jin-han analog character. The movie is from his perspective and we are inclined to dislike him from the beginning, so his suffering is amusing.

By contrast, the perspective character in "The Vanished" is detective Joong-sik (played by Kim Sang-kyung). This proves awkward for the tone, since nothing particularly scary of thrilling ever happens to Joong-sik. In both movies, Joong-sik is the straight man who simply sees random coincidence in places where Jin-han grows increasingly paranoid because there's only one person who could possibly know about these horrible secrets and she's supposed to be dead. By playing the movie as a whodunit rather than a dark psychological comedy, director Lee Chang-hee kills a fair amount of the impact.

In the end "The Vanished" is still a perfectly watchable movie. The mystery is well constructed in the classical style. We are given ample enough information that clever viewers should be able to suss out what really happened that dark and stormy night before Jin-han finally makes a frantic dash to the place ominously referred to as the spot of "our crime" by certain cryptic messages. But those simple genre frills are about all you're going to get here.

"The Vanished" is directed by Lee Chang-hee, and features Kim Sang-kyung, Kim Kang-woo and Kim Hee-ae.