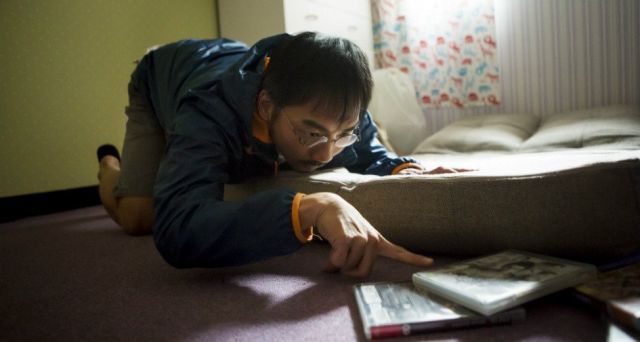 The first segment, directed by Francis Ng, depicts a man who's been degraded into homelessness and street begging from a presumably impressive past life which is not spelled out clearly until some time in. The lesson learned- being poor and homless really sucks, and there isn't really a whole lot even an individualist success story can do to crawl out when absolutely everything is taken out from under him. It would be cliched if not for the depressing fact that all too many people genuinely believe that poverty is just something that happens to lazy people.

This depressing undertone marks all three of the short films in the omnibus, really. It's not that anything is all that terrible, it's both realizing that the characters' problems are simultaneously unsolvable, but also that there's not really any way for them to persuade other people about the miserable situation that makes up life as they know it. All they can do is just sort of stare blankly, hoping the problems will go away on their own.

The second segment, directed by Jung Woo-sung, demonstrates this quite literally with the story of a hitman who keeps stalling on his assigned mission of assassinating an elderly man mostly because he's hoping the guy will die on his own before an assassination is necessary. Death is never a particularly fun subject, and the segment is noteworthy for taking a trendy trope like the reluctant hitman and just making it look like a really unpleasant job.

If there's any weakness in the omnibus it's that all of these concepts are very easy to describe, almost to the point of being dull. Yes there's a certain artistry to the craft, but in the end we're spending thirty minutes watching a guy try to avoid actually doing anything. There's not even much dialogue, so the result tends to be the emphasis of style over substance. "Three Charmed Lives" sets out to make a soft, easygoing tone mostly to ease us into the general despair of everyday life.

The final segment, directed by Chang Chen, is the only particularly relatable one of the bunch. A man loses his job, which isn't that big a deal since his wife also has a high-powered one, but rather than take the opportunity of joblessness to be a good homemaker to their young daughter, he instead spirals into the perils of playing too many video games. OK, honestly, men being homemakers is a concept I really like, but no one else does. So I can hardly blame the segment for failing to hit that particular level of personal appeal.

No, "Three Charmed Lives" is all about leading us into bittersweet endings that kind of sort of feel happy until we remember the context of the world presented so far. Then it's just a matter of realizing that imperfect long term situations can only ever possibly have barely passable short term solutions. I supposed that's what makes these lives charmed- that the characters are even able to wring that much joy out of such a discouraging world has to qualify at least as a minor miracle.