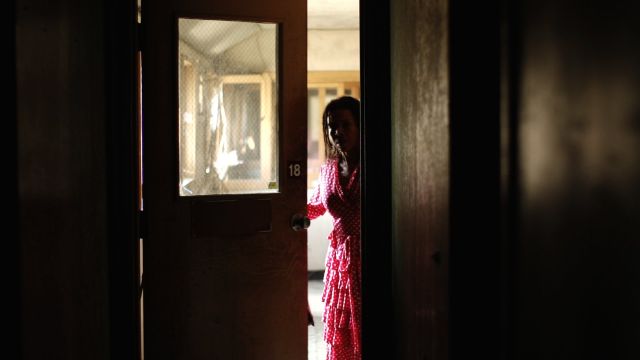 The United States spends more on its military than every other country in the world put together, much of it being used to maintain overseas armies. These armies tend not to be very helpful when it comes to doing...whatever it is they're supposed to do. But one major economic benefit comes with nearly every single overseas American military base. The local prostitution market is able to make good business. Oh those whiny Koreans- who ever said we don't do them any favors?

"Tour of Duty" deals with one such community north of Seoul. For the most part directors Kim Dong-ryung and Park Kyoung-tae focus on the dingy outdoors environment. One essential irony of these military towns is that they were set up in a rush under the assumption that the American military would probably leave at some point. Yet day after day, year after year, the foreign troops don't leave and the town still looks like trash because who knows? This could be the year.

By the way, don't expect too much in the way of interviews or context from "Tour of Duty". Mostly all we get are long empty shots, occasionally punctuated by an extended story where a prostitute or a daughter of a prostitute gives the basics of her life story. These stories tend to be interesting mainly because there's no sense of bitterness or anger, even though the contents of these narratives are frequently morbid and disturbing. Which does make sense. The kind of women who work in these camps aren't the kind who have much in the way of opportunity anywhere else.

And there are also brief moments of joy. Like one sequence near the end that shows a woman out on a date with an American servicemember. Neither one of these people are terribly attractive, her English is only minimally functional, and the backdrop is every bit as unappealing as it was when the camera was just facing empty streets and playgrounds in stone cold silence. Even so, these two look cute, obviously enjoying each other's company. Even in the most miserable looking environment people can manage to live by just making an effort to not act depressed.

"Tour of Duty" would be an interesting companion piece to "Dear Dictator" if only because the two movies have a very similar visual aesthetic. This is of no surprise, given that the filming locations were quite close to another, but the tone differs quite radically. Where "Dear Dictator" is bitterly cynical, "Tour of Duty" typically refuses to express any opinion at all, giving us little more than a fixed camera angle to go by.

This, unsurprisingly, is "Tour of Duty"'s greatest downfall. As immensely enlightening as the documentary is when it comes to the question of what the general environment of American military prostitution camps are like, this is another one of those independent films where the viewer is just stuck watching nothing happen for seemingly interminable stretches of time. So tread carefully- it's probably not a good idea to try and watch "Tour of Duty" all in a single sitting.