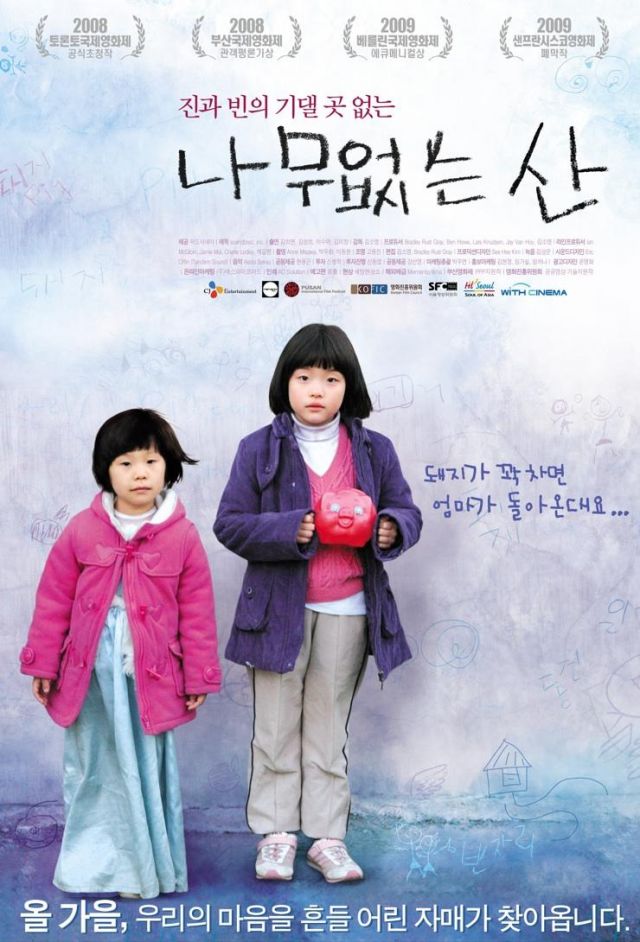 Whereas movies are near-unanimous in their condemnation of child abuse, it's much more unusual to see anything depicting child neglect in similar terms. In many a film the fact that parents are nowhere to be found is considered a good thing, as it enables many wacky adventures. The question is rarely asked as to what the neglected children do when there aren't any wacky adventures to be had.

"Treeless Mountain" deals with two children who soon find themselves left without much input from adults on what they're supposed to be doing with their lives. Jin (played by Kim Hee-yeon-I) is the older of the two, and marginally more mature, to the extent it can be reasonably expected from a seven year old girl. Bin (played by Kim Seong-hee) has no real direction at all, and is mostly reliant on her sister for everything, though she does have a good streak of younger sibling contrarianism in her.

These two girls live in a world where there's nothing for them to do but wait. Bored, they listen to any suggestion given to them by anyone, and take the ideas they come up with to the greatest possible illogical extreme. They never turn into horribly vicious children, although attentive parents in the audience may question the ethical or learning value of their unsupervised playtime. There's always this tension that they're just one life experience away from having the rest of their life forcibly predetermined.

Director Kim So-yong doesn't present this childhood in a particularly sentimental or cynical way. Rather, she correctly identifies that the main aspect of life for a child is that they really don't understand how life is supposed to work, but are intensely interested in trying to find an answer to that question anyway. Even in their loneliness, Jin and Bin show remarkable work ethic and perseverance. This isn't out of some adherence toward moving the narrative nearer to a happy ending. It's just that they're kids. What else are they supposed to do? Even the concept of motivation is loosely defined for them, and the viewer sees the problem with their main scheme long before the kids do.

The film also begs for some psychological introspection. I remember very little of my childhood, save for some minor ideas I accidentally latched on to from offhand statements to which I started attributing undue importance. These ideas still inform a great deal of my personality today, even though I understand their basically illogical roots. I can see Jin and Bin coming to similar realizations some twenty years after the events of this film.

"Treeless Mountain" is a kid's movie with no apparent purpose or attempt to deliberately appeal to anyone. This on its own makes it a fascinating study in the assumptions we make about children. Neglecting children is not, by any stretch, as awful as directly abusing them. It's still terribly problematic, and for anyone wanting or aleady raising a child, "Treeless Mountain" makes a good case for why it's important to discuss contigencies in case of an absentee parent.