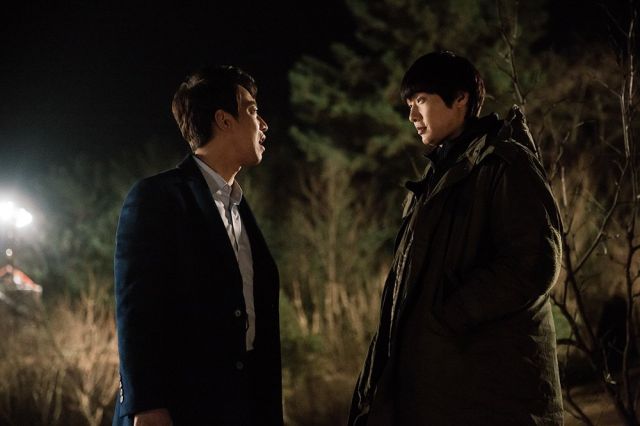 Usually when movies do psychopaths they're either of the disarmingly charming variety or they act like crazed lunatics every waking moment. "True Fiction" takes the seldom-traveled middle road. Kyeong-seok (played by Oh Man-seok) is an aspiring politician who doesn't respect boundaries. His mistress Ji-yeong (played by Lee Na-ra) helps him be a jerk, without actually liking him all that much to begin with. Then they meet Soon-tae (played by Ji Hyun-woo), a bestselling novelist who tells elaborate implausible stories in such a way that implies he is actually being truthful.

After the three characters are introduced Soon-tae starts telling these weird vignettes to Kyeong-seok and Ji-yeong. The tension builds from the fact that these stories are actually completely pointless, and Soon-tae simply enjoys wasting their time for his own twisted amusement. When Kyeong-seok starts to physically escalate the situation in the hope that maybe Soon-tae will eventually get to the point, Soon-tae too responds with more physical escalation.

The more Kyeong-seok gets annoyed, the more we start to see his true self. Which is nothing all that impressive. Kyeong-seok just likes bullying people. But at the same time, Soon-tae's explicit trolling doesn't come off much better. The distinction between a guy who is actually a socially obtuse idiot and one who simply pretends to be a socially obtuse idiot is not a particularly meaningful one.

That Soon-tae comes off as so dorky and obnoxious when he is obviously trying to be cool is the main effective irony "True Fiction" has going for it. Kyeong-seok is frustrated because nothing he does seems to be enough to wipe that stupid grin off Soon-tae's face. Making matters worse, the fact that Soon-tae did a much better job preparing for the encounter than Kyeong-seok did especially hurts Kyeong-seok's ego, because he is a man who prides himself on being smart. Of course, in reality all Kyeong-seok does that's "smart" is just beating people up when he can get away with it.

This is not the behavior of a particularly accomplished criminal mastermind. Indeed, "True Fiction" has a great running gag which shows that Kyeong-seok "wins" fights via sucker punching, and can easily be dispatched even by minor characters who take the first shot instead. All of the fight scenes in "True Fiction" are won solely by virtue of who gets the dumb luck of surprise- and that's only when random events force Soon-tae's carefully crafted role playing game to go off script.

Not that Soon-tae himself cares very much about that. A psychopath to the end, Soon-tae values cheap thrills even over his own life. In that way "True Fiction" inspires a lot of feelings of ambivalence. When every single character is equally petty and mean, there's not anyone left to root for. Still, "True Fiction" makes up for that just by virtue of its concept of making generally romanticized master criminals look really dumb and pathetic. Though not a conventional narrative choice, the story nonetheless manages to be interesting just on novelty value alone.