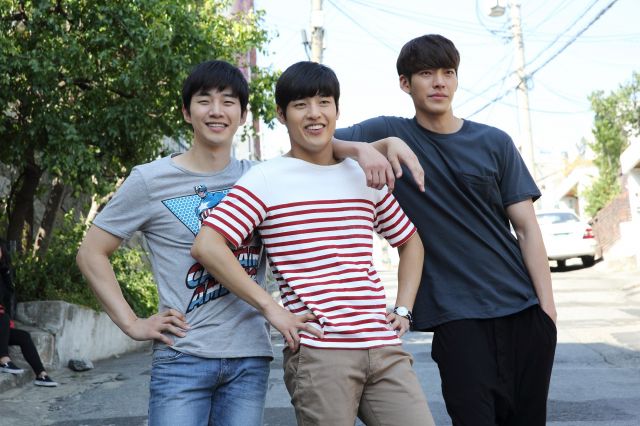 I'm just gonna come out and say it- being twenty really sucked. Goodness knows culture tries to convince us that this was the greatest time of our lives, but the simple reality is that when we were twenty, we had no idea how the world really worked. And yet, we were just barely smart enough to think we had a grasp on what was going on, even if it was obvious that we did not. So it is with Chi-ho (played by Kim Woo-bin), Dong-woo (played by Lee Junho) and Kyeong-jae (played by Kang Ha-neul). They became friends under peculiar circumstances, and these are the circumstances in which their relationships continue to awkwardly exist.

One of the stronger parts of "Twenty" is the way the movie deals with social ambience. Chi-ho is distinguished from his two friends by having the most sexual prowess. This does not, by common feminist parlance, make him a "stud". Chi-ho is successful with women mainly because he has absolutely no sense of shame. Dong-woo and Kyeong-jae understand this, and even as they obviously want to get it on with girls, it's always made pretty clear that they most definitely do not want to emulate Chi-ho's behavior and feel somewhat ashamed even having a mild understanding of his worldview.

The girls, by the way, are also characterized as having a similar lack of depth in spite of their obvious good looks. There's So-min (played by Jung So-min), So-hee (played by Lee Yoo-bi), Jin-joo (played by Min Hyo-rin), and Eun-hye (played by Jung Joo-yeon). I suggest you familiarize yourself with which character is which quickly, because there are moments when they sort of blend together.

That's a problem with both the male and female characters actually. Partially this is intentional- the main motive of writer / director Lee Byeong-heon-I, as far as I can tell, is to demonstrate that people in their early twenties are all rather united by a general sense of cluelessness. Chi-ho is able to make progress by faking confidence- yet by the end of the movie he remains the most aimless of the three leads, because bravado can only get you so far.

Even so, on the individual level the performances are quite good. What with all the movies these days being about suave, cool, debonair young people, I think the cast was just really happy to finally let loose as being the immature dorky kids they really are. Two characters end up making serious life decisions that they seem to know full well are rather bad ideas. But what can they do? Life's just opportunity isn't it?

Well, if there's any moral thrust to be had from "Twenty", it's that only having a potential future of opportunity is not necessarily a good thing, because in the long run you're probably going to end up with nothing. Oh, and also there's jokes. That's an easy fact to miss because "Twenty" is quite interesting from a socio-cultural perspective, but this is actually a pretty funny movie that will probably translate well in other languages. Provided you were ever a twenty-year-old yourself in a college prep environment, you'll probably identify with at least one of these people. And that's really all you need to enjoy the film.