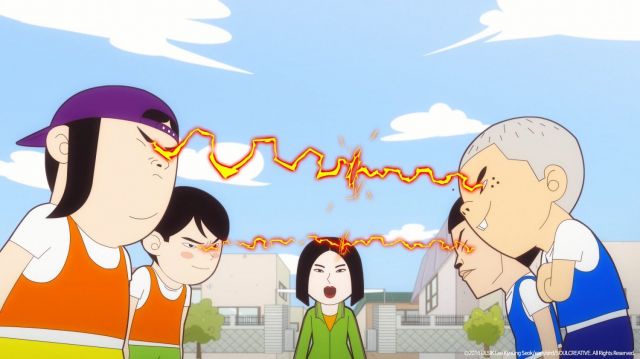 From the same creative team that brought us "Hello Jeon Wo-chi! The Battle of the Magic Robots" comes the much more simply titled and mundane gag cartoon "Ulsik the Clumsy Boy". Personally I would have gone with "Ulsik the Luckless Lad" but then I'm a fan of alliteration. Anyway, the story, to the extent there is a story, is pretty simple. Ulsik (voiced by Ahn Se-hyeon) and Heung-sik (voiced by Kim Dae-chang), Bam-tol (voiced by Kim Chang-hoo) and Fatty (played by Jeong Yeong-soo) are generally immature elementary school students who obsess over petty revenge, and also girls.

Ulsik is actually the least well-developed character of the four, because he doesn't care about girls- but he is most definitely luckless, usually as a comeuppance for his own ill-advised bouts of arrogance. Ulsik plays the odd double role of both being the perspective character (as the only one without a love interest), and also as the most convincing villain. In the big climactic soccer game Ulsik explicitly acts like a jerk, particularly to his supposed best friend Heung-sik, and we're just waiting for the hammer to come down.

Heung-sik, by contrast, is excessively well-meaning to a fault. He spends a ridiculous amount of screentime intentionalky trying to get hit in the face, to the point that a training montage ends up being necessary to teach Heung-sik how to play soccer correctly. Because Heung-sik is just that kind of guy- the one who comes up with romantic interpretations of events and simply refuses to modify his point of view in recognition of emerging realities.

Bam-tol is the most mean-spirited of the boys, although even he never really rises to the level of explicitly unlikable thanks to the generally low stakes of the story. Where Ulsik's plans backfire in particularly extreme and comic fashion, Bam-tol succeeds at what he wants to do in the short run, but fails in the long run by not appreciating the true meaning of friendship. Bam-tol does eventually figure it out, because "Ulsik the Clumsy Boy" is aimed at children after all.

But much like "Hello Jeon Wo-chi!" The Battle of the Magic Robots" before it, "Ulsik the Clumsy Boy" is in no way presented in a condescending manner. While the gag humor is frequently dumb and simple, this is by design because the simplest jokes are the easiest ones to understand. This also gives "Ulsik the Clumsy Boy" a fairly universalist quality. Note how the characters only care about the big soccer game at the end due to secondary goals. They could care less who actually wins.

This leads me to my favorite character, Fatty. While that's not his real name, he is fat. Or big boned. Whatever. The point is, he likes a girl who is repulsed by his hideous appearance. This issue is not solved by the end of the movie. The understanding is that over time, Fatty will be able to work toward his goal, with help from friends and adults. And you know, that's a really sweet sentiment to end on.