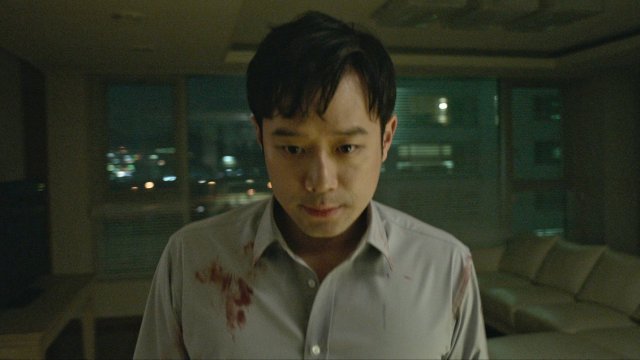 Sang-gon (played by Chun Jung-myung) finds himself somewhat unwillingly thrust into the life of a gangster boss. He gets stuck having to maintain his illegitimate business by destroying everything he loves. Cheol-hoi (played by Jin Yi-han) is Sang-gon's loyal goon, who supports Sang-gon's noble goal of trying to reform the mafia from the inside. This is, you might have guessed, a very stupid goal. So nobody has all that much fun over the course of "Unalterable: The Untold Story - Director's Cut".

Least of all the viewer. "Unalterable: The Untold Story - Director's Cut" is an extremely brooding movie with minimal variation. We watch our very glum-looking leading men kill people, surprisingly often by complete accident, and then just look rather sullen as they reflect on the poor life decisions that led them to this point. If director Lim Sung-yong's intent was to make the gangster life look surprisingly pathetic and stupid, well, he certainly succeeded there.

"Unalterable: The Untold Story - Director's Cut" is in a way kind of clever in that regard. It plays off gangster work as just being a very unpleasant management job most of the time. It's just that you're managing employees into beating people up and stealing their money. So it's not exactly rewarding, at least unless you like money a whole lot. Weirdly enough almost no one in "Unalterable: The Untold Story - Director's Cut" even seems to care about money all that much, even after the extended jail sequence. So the movie doesn't exactly present a compelling portrait of why people turn to crime in the first place.

The jail sequence, incidentally, is a highlight mainly because it's the only time the movie's generally discouraging tone really works. It makes sense for gangsters to be disgusted with themselves and upset at life in general when they're in prison. That's because prison sucks. It's supposed to suck. Prison is supposed to make you not want to do crimes anymore. But when the main characters barely even wanted to do crimes before going to prison...the whole situation just feels obnoxiously forced is all.

Much like the movie's whole existence really. I'm not sure why "Unalterable" needed a director's cut, especially one this counterintuitive. Rather than adding deleted scenes "Unalterable: The Untold Story - Director's Cut" actually cuts about twenty minutes' worth of existing ones. Normally this wouldn't bother me, given that I didn't like the movie I saw all that much anyway. But this certainly explains why there were parts where I was just scratching my head feeling like there was some sort of important context I was missing.

That's not necessarily the director's fault though, at least not directly. The performances are quite bad, and poorly distinguished compared to one another. I came to really like Min-jeong (played by Lee Shi-ah), simply because as a non-gangster character she had a significantly different personality compared to her co-stars. Min-jeong likes hanging out. And date night. She's not a particularly deep character but after a certain point anything beats endless moping.