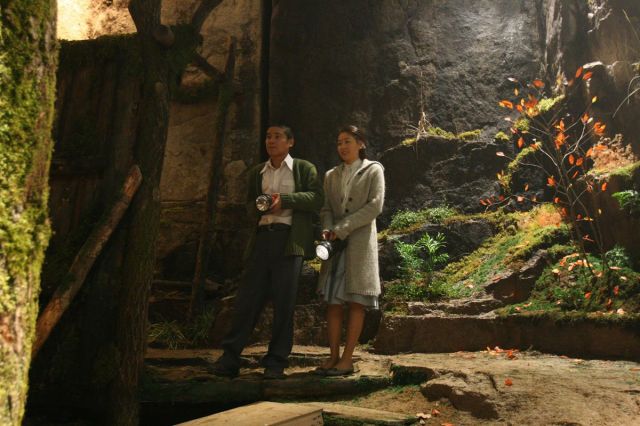 Following the Japanese surrender in World War II, American and Soviet forces, for geopolitical reasons that didn't make much sense even at the time, created an arbitrary demarcation line splitting the Korean peninsula into two pieces. Overnight, people from nearby villages, family members even, were not allowed to contact each other. "Underground Rendez-vous" has a promising start with this set-up then quickly moves all the focus to a romance between luckless traveler Yeong-tan (played by Im Chang-jung) and local woman Seon-mi (played by Park Jin-hee).

Not that this focus is all that consistent, you have to understand. Yeong-tan mostly gets jerked around for a bit before he appears at the mysterious village. From there he is alternately treated with affection for being an educated man and also scorn for always being dangerously close to learning their terrible secret. It had apparently not occurred to anyone, over the past several decades, that acting like you have something to hide is the best possible way to get people to start snooping.

The possibility of a rural North Korean and South Korean village maintaining regular communication with each other throughout the Cold War is by far the most fascinating concept in "Underground Rendez-vous". Unfortunately, because so much attention is kept on Yeong-tan as a perspective character, we never see the situation explored from the villagers' side. Low-brow physical comedy takes precedence over political commentary.

...Granted, "Underground Rendez-vous" is in fact a comedy, so this is somewhat reasonable, save for one problem. The jokes aren't particularly funny. It's mostly just uninspired situation comedy. As in, Yeong-tan is all tied up. Seon-mi is a reasonably attractive woman. Some other guy is trapped next to a land mine. OK, I actually thought the last recurring bit was fairly funny, simply because it's an unusual set-up and really, what does a guy do when he's liable to blow up if he steps the wrong way?

Yet all of this ends up climaxing in a sequence where in completely separate incidents both the North Korean and South Korean militaries get wind of something fishy going on in the town and...then the movie ends. Yeah. To write that this is disappointing is a bit of an understatement. We finally get an action sequence and the characters all just give up without a fight. Then we get a bunch of newspaper headlines of other potentially interesting storylines for which we get exactly one scene.

"Underground Rendez-vous" is the rare movie that would have worked so, so much better as a drama. Writer Lee Hyeon-cheol shoehorns so many generic jokes into this movie that the more unique premises go completely unfulfilled. All I was left with by the end was this deeply disappointing realization that the characters were unintelligent with at best shallow goals. It's really hard to empathize with Yeong-tan as a lead when his main defining trait is having no clue what's going on. And really, a guy needs to have some kind of redeeming qualities if he's going to be in a romance with a cutie like Park Jin-hee.