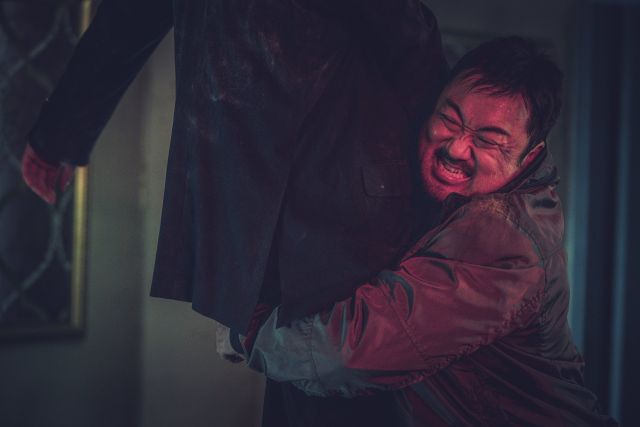 Don't let that ominous theatrical poster or the similarly imposing title fool you. "Unstoppable" is a surprisingly light-hearted movie. I mean sure, Dong-cheol (played by Ma Dong-seok) is built like a tank and his wife Ji-soo (played by Song Ji-hyo) does inevitably get kidnapped. But up until that point, "Unstoppable" is a very domestic film, where the leading man eschews violence for the sake of respectability, to the point that even Dong-cheol's partner gets annoyed at his excessive passivity. Adorably cute domestic squabbles follow.

This is the backdrop from which writer/director Kim Min-ho-II drops us into a more traditional vigilante storyline, where it's up to the muscle-bound hero and his comic relief sidekicks to save the day when the police can't. Or won't? In a nice contrast to "Midnight Runners" which provided ridiculous excuses for why serious policemen couldn't solve the human trafficking case, "Unstoppable" is ambiguous on the point of whether the police are deliberately incompetent or merely disinterested in the crime Dong-cheol reports.

But never mind the subtext regarding the extent to which anyone can trust the police. How does "Unstoppable" work on the action front? Very well actually. There's a lot of understatement. Consider, for example, all the unfilmed action scenes. That's because quite often what we're actually getting is the perspective of another character in a nearby room who can't see what's going on, but can hear some very alarmingly loud crunching noises indicating that Dong-cheol is nearby and making quick work of everyone dumb enough to get in his way.

What's so great about Dong-cheol is that he's normally this very docile guy. He never projects any sort of menace. Even when making explicit threats, Dong-cheol's attitude is just, come on everybody, I'm in a bit of a hurry and I'm not trying to rip you off, can we just get this over with? A lot of gags also take Dong-cheol's inherently reasonable nature into account. This man is a big fan of compromise.

That also makes Dong-cheol a nice foil for the villain Gi-tae (played by Kim Sung-oh) who is constantly pretending to be a reasonable compromiser only to abruptly change tone mid-sentence into complete psycho mode. These shifts are jarring, and really underscore how Gi-tae is a man who can only ever be dealt with via nonstop punching. Note that, true to the title, Dong-cheol is "Unstoppable" provided he can figure out the right direction to aim his fists, so the entire plot is mainly just about an investigation to figure out which direction that actually is.

"Unstoppable" also fully understands its own appeal as a genre film. As dark as the plotline may seem at times, those moments are always in service to the story- brief moments of horror are shown to underline the dramatic stakes, not to fetishize the more grisly undertones. Sure, excessive violence may be Dong-cheol's main useful skill- but most of the time he's just a thoughtful guy being the straight man to his wacky friends. Relatability and classic form are what make "Unstoppable" a good movie, not pushing boundaries.