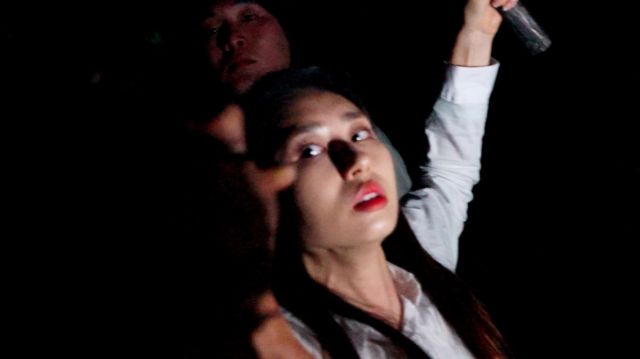 Don't be caught off guard by the opening title for "Very Bad Moon Rising"- this is indeed a Korean film, even if the starting point is a Japanese experiment. Also don't be fooled by hints that the creepy Japanese head knows what's going on. I didn't know what was going on for most of "Very Bad Moon Rising" and neither did any of the characters. Their job was just to find a random headstone located in the middle of nowhere, a task made very complicated for no good reason.

I mean that literally. "Very Bad Moon Rising" starts with them engaging in random banter about nothing, and even as more characters join the entourage, still, all they do is engage in random banter about nothing. They only lose their patience when the fifth member of the team shows up. His banter is just as stupid as everyone else's, but he keeps laughing inappropriately and for no reason, eventually driving all the other members of the team insane.

That part I do not mean literally. The characters are more annoying than evil. Unfortunately. Had they been just a tad more malicious their inevitable deaths at the whim of supernatural forces might have been gratifying. But I never really hated them that much. I didn't like them, either, but my main response to dealing with people I don't like is to not wander around with them randomly in the wilderness for hours on end.

...Well, OK, "Very Bad Moon Rising" is a relatively short movie, so it's not like the experience was execrable or anything. It's just, director Oh In-chun obviously only had the money to film the cast taking long hikes and having meaningless conversations, so that's all we get. We have to wait so long for a single character kill that it's pretty much inevitably a let down, and even more low budget than I was expecting.

Mind, my expectations were pretty mild to begin with. I spent a lot of time squinting into the background hoping for unexplained weird stuff. But alas, the closest director Oh In-chun gets to gimmicks is this odd filter effect, the exact purpose of which is unclear. Like a lot of low budget horror movies, "Very Bad Moon Rising" is probably expecting us to piece together the back story ourselves from limited information. In general this is a good tactic, since our imaginations are typically better at conjuring up horrible personal fears than even the greatest horror film.

But then "Very Bad Moon Rising" is not the greatest horror film. It's not even a good horror film. I hesitate to even call it a bad horror film, because that would require I have a reaction more complicated than just mere acknowledgment of its existence. On one level I admire director Oh In-chun's tenacity. This is a man clearly determined to continue making horror movies regardless of whether anyone funds them or even likes them. So I have to give "Very Bad Moon Rising" that much- it is definitely a movie that exists.